No Nudes Allowed in Texas

Previous Next
No Nudes Allowed in Texas

DALLAS—The American Civil Liberties Union of Texas today announced that it has filed a lawsuit against the city of Pilot Point and its police department, charging that police officers violated an art gallery owner’s freedom of expression by coercing him to remove a mural depicting the biblical story of Eve.

“It is unconstitutional for government officials to censor a work of art because it might offend a small group of people,” said ACLU of Texas Executive Director Will Harrell. “It is also a misuse of resources to have our law enforcement officials act as art critics.”

Dwight Wesley Miller drew the attention of local police after displaying a mural depicting the creation of Eve on an exterior wall of his art gallery in the northern Texas town of Pilot Point. The mural borrows heavily from Michelangelo’s “Creation of Adam” fresco in the Sistine Chapel, and in particular from a portion of the fresco that depicts God reaching out to touch Adam. At the far end of the mural sits a classical female nude, in a pose that is a variation of Adam in the Michelangelo creation scene. God’s finger points at an apple, a traditional image of the forbidden fruit in the Garden of Eden, suspended between God and Eve.

Because Eve’s breasts were bare in the mural, the Pilot Point Police Department repeatedly threatened, in writing, to prosecute Miller under a criminal statute aimed at those who would victimize children by selling or displaying to them hard-core pornography. In order to avoid the expense and embarrassment of being charged with such a sordid crime, Miller covered Eve’s breasts with a “Crime Scene Banner” tape.

“The threats against Mr. Miller by law enforcement were baseless and wholly inappropriate,” Harrell said. “The Farmers and Merchants Gallery mural is no more pornographic than the Sistine Chapel or countless other works of art portraying classical nude figures.”

The ACLU said that the U.S. Supreme Court has repeatedly ruled that simple representations of nudity are a constitutionally protected form of artistic expression. The Court has also declared that the First Amendment bars government officials from censoring works that some people might find offensive or morally improper. 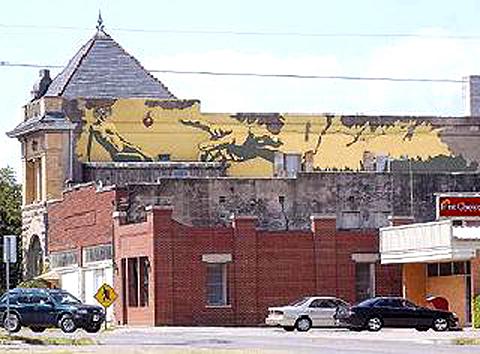 A mural containing a classical nude has become the target of police harassment in the small town of Pilot Point in Northern Texas. Wes Miller, owner of the gallery on whose wall the nude is painted has received a police notice claiming the mural is in violation of the Texas Penal Code 43.24 banning the sale, distribution and display of material harmful to minors. Miller is given the choice of modifying the mural or facing criminal charges. The mural itself, reminiscent in composition of Michelangelo’s Creation of Adam fresco in the Sistine Chapel, depicts a large hand pointing at an apple and a classical female nude on the other side contemplating that same apple.

Article 43.24 of the Texas Penal Code defines material that is harmful to minors as material “whose dominant theme taken as a whole” “appeals to the prurient interest of a minor,” “is patently offensive to prevailing standards in the adult community as a whole with respect to what is suitable for minors,” and “is utterly without redeeming social value for minors.” What the article targets is commercial pornography, not artwork. The mural on Wes Miller’s wall is certainly not “harmful to minors.”

As to the nude, which was, apparently, the “offending” detail, the U.S. Supreme Court has repeatedly declared that simple representations of nudity are a constitutionally protected form of artistic expression. The beauty of the human body has inspired painters, photographers, sculptors and choreographers for many centuries. Deeming all nudes “harmful to minors” would place a ban on Praxiteles, Michelangelo, Rembrandt, Manet, and Picasso; it would put the Vatican, as well as the streets and public squares of the U.S. capital and other big cities off-limits to minors because of the sculpted and painted nudes that can be seen there.

Banning nudes from view is a concession to the moral views of a small group of people who believe that the human body is an object of shame and should not be seen uncovered. The large and diverse American public as a whole does not share that belief. While we need to respect the right of people to hold a variety of religious and moral beliefs, the government should not embrace the beliefs of one group to the disadvantage of everyone else. The U.S. Supreme Court has repeatedly asserted that the First Amendment bars government officials from censoring works because somebody finds them offensive, sacrilegious, morally improper or otherwise offensive.

NCAC is urging the city of Pilot Point to withdraw the police notice immediately.