A Pig-Headed Reading of the Law

Previous Next
A Pig-Headed Reading of the Law 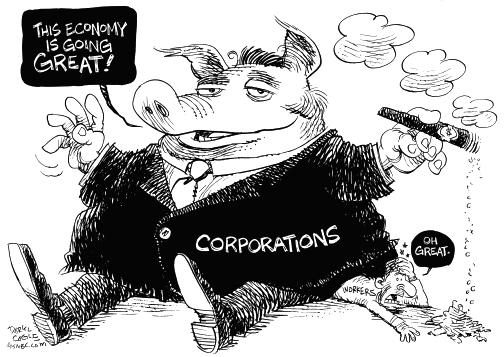 Smithfield Foods, the world’s largest producer of pork products, has raised the stakes in its resistance to organizing efforts by the United Food and Commercial Workers (UFCW) by filing a lawsuit alleging that the union’s advocacy violates The Racketeer Influenced and Corrupt Organizations Act (RICO), a federal law designed to combat organized crime.

Smithfield and UFCW have been locked in battle over unionization for years. The RICO lawsuit came after the union launched a public campaign, Justice at Smithfield, seeking to build public support for its organizing efforts.

Smithfield’s suit accuses the union of economic extortion “designed to destroy Smithfield’s public image and inflict maximum economic damage.” The company seeks millions in damages and an order barring UFCW and its allies from conducting “demonstrations and other activity,” “from publishing … statements, reports, or press releases,” and “from … drafting, encouraging, sponsorship and/or passage of public condemnations of Plaintiffs” by City Councils, religious grous, and other entities.

These activities are time-honored organizing tactics that appear, at face value, to be constitutionally protected forms of speech. The Supreme Court has held that “peaceful picketing [is] entitled to constitutional protection” even if its purpose is “to induce … customers not to patronize the employer.” Indeed, early debates on RICO had reassured critics that the law would not operate to suppress protected speech, such as anti-war protests. One of the law’s principal authors claims that it was never intended as “a weapon of terror against First Amendment freedoms.”

The claims asserted by Smithfield thus appear inconsistent with the original intent of RICO. As Justice Souter noted in a concurring opinion in a case in which RICO was invoked against anti-abortion protesters, “conduct alleged to amount to … extortion, for example … may turn out to be fully protected First Amendment activity, entitling the defendant to dismissal on that basis.”
Since the Smithfield case was filed, at least three other RICO actions have been brought by corporations against unions attempting to organize workers. The Wackenhut Corporation filed a RICO case against the Service Employees International Union in November 2007; Bashas’ supermarket chain filed against UCFW and others a month later; and the Cintas Corporation filed a similar suit against UNITE HERE, the Teamsters, and others this March. Each of these cases was preceded by NLRB investigations involving charges of intimidation, harassment and coercion and other unfair labor practices by the company. In most cases, the charges were upheld by the Board or a reviewing court before the RICO actions were filed.

The fight to secure speech rights for workers – including the rights to protest working conditions, to organize and form unions, to bargain collectively, and to strike – was a crucial and defining test of the First Amendment in the early part of the 20th Century. Labor activists met stiff resistance: organizers were beaten by private police forces hired by employers, and were jailed by law enforcement officials more sympathetic to bosses than workers. Many of these rights were written into law with the passage of the National Labor Relations Act in 1935, but the struggle to secure speech rights for labor presaged battles to come. Civil rights activists relied on speech and petition rights a few decades later, using the same tactics of protests, leafleting, picketing, and public opinion campaigns to advance their cause. These struggles not only achieved many practical gains, but also defined freedom of speech as the constitutionally-guaranteed means to achieve social and legal change without violence.

Controversies over social justice are ultimately resolved in the court of public opinion. This may explain why Smithfield and other employers are trying so hard to silence the opposition. Using the threat of a costly court battle over RICO claims to chill, if not shut down, vigorous and open debate over contentious social issues is an ominous development.