Confronting the Past in Pain[t]

Previous Next
Confronting the Past in Pain[t] 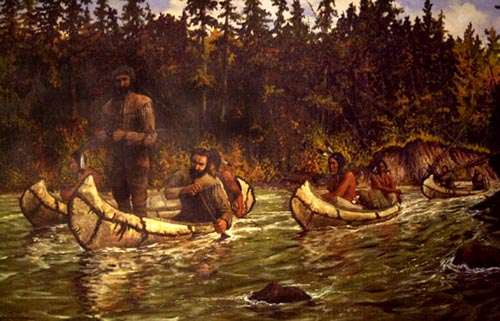 History textbooks are re-written every few years – not because the past changes, but because our understanding of it does.

Even as we reconsider our understanding of the past, artifacts survive that remind us how our predecessors saw the world. Historical paintings are a case in point. Many such works are inconsistent with contemporary attitudes about social relationships, equity, and prejudice, and are upsetting by today’s standards. Should they be removed from public view? Destroyed, even? NCAC has opposed several recent attempts to remove historical paintings and sought other ways to address the negative reactions to their content.

This past spring, at the University of Wisconsin-Stout, the Diversity Leadership Team and some students requested the removal of two 1935 landscape paintings of trappers and First Nations people because they could be “harmful” for minority students. The Chancellor, who initially agreed to put the works in storage, later decided to relocate them to a “controlled,” less visible, location. He explained that Native American students may “feel bad when they look at [the paintings]” because they “symbolize […] an era of their history where land and possessions were taken away from them.”

A few months before, the University of Kentucky shrouded a mural depicting African-American slaves picking tobacco and black musicians entertaining white dancers. The university president cited a student who complained that “each time he walks into class at Memorial Hall he looks at the black men and women toiling in tobacco fields and receives the terrible reminder that his ancestors were enslaved, subjugated by his fellow humans.” The president added, “The mural provides a sanitized image of that history. The irony is that artistic talent actually painted over the stark reality of unimaginable brutality, pain, and suffering.”


Similar debates have put a spotlight on murals in public buildings in Alabama, Idaho, Minnesota, and Connecticut, where some charge that the works “whitewash” and romanticize a brutal past or reinforce a hierarchy of oppression. Others simply do not want to confront this painful history every time they enter a public building.

Most of these now-controversial works were produced as part of the Works Progress Administration’s (WPA) Federal Art Project, a 1930s New Deal program. Many WPA artists were aware of issues of equity and exploitation and commented on them subtly. As the writer Wendell Berry observed about the University of Kentucky mural, “The uniform clothing and posture of the workers denotes an oppressive regimentation. The railroad, its cars filled with white passengers, seems to be borne upon the slaves’ bent backs.”

Different audiences see art through their own experiences. If individuals who already feel marginalized “feel bad” viewing a work, even if the work is historically accurate and even socially progressive for its time, shouldn’t a college president or a city manager take action?

Action, indeed, should be taken. The question is what kind of action. Removal, destruction, or shrouding does not change the past, or the legacy of that past, which still haunts us today. Instead of spending thousands on moving or covering a work, why not spend that money by inviting contemporary artists to create works in response? Or use it to engage the public in discussion about the work by inviting communities to reflect on how we remember the past and reconstruct history.

The feeling of offense can be a tremendous political force. It can be used destructively to stifle ideas that violate today’s orthodoxies, or productively to offer new and critical perspectives and maybe even change the way we live.