The Controversy That Won’t Quit

Previous Next
The Controversy That Won’t Quit 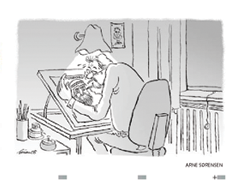 On September 30, 2005, the Danish newspaper Jyllands-Posten published “The face of Mohammed,” 12 cartoons (including the one at right, by Arne Sørensen) accompanied by an article in which editor Flemming Rose commented provocatively, “The modern, secular society is rejected by some Muslims. They demand a special position, insisting on special consideration of their own religious feelings. It is incompatible with democracy and freedom of speech, where you must be ready to put up with insults … it is certainly not always attractive and nice to look at, and it does not mean that religious feelings should be made fun of at any price, but … we are on our way down a slippery slope, and no one can tell how the self-censorship will end.”

Who could have anticipated the fallout of this perhaps ill-advised, but seemingly innocuous effort to stimulate debate? To date, 139 people have been killed (and another 823 injured) in protests triggered by the cartoons. More than a dozen editors worldwide have been arrested for reprinting them, just as many have been fired, and several more have resigned in protest. Newspapers have had entire print runs seized, licenses suspended, or have been altogether shut down. Meanwhile, the twelve original illustrators remain in hiding.

Though unprecedented in scale, the furor over these cartoons raises familiar questions. Are there moral or ethical imperatives that should be recognized in addressing sensitive issues concerning religious beliefs? Do members of a particular group “own” the right to control language and discourse about their unique experiences? What is the relative value of free speech in different cultures?

This is clearly more than just a debate over free speech: the extreme global reaction cannot be separated from a heated political context that includes controversial American foreign policy, a rising tide of European hostility toward immigrant populations, and the incitements of clerics and politicians whose interests are served by stirring violence.

That said, all words and images exist in complex socio-political contexts and, as is painfully clear, can trigger disproportionate responses. Suppressing controversial expression cannot erase the underlying tension, but it does risk giving rise to a dangerously undemocratic climate, wherein satire of any group is off-limits. The line between sensitivity and censorship is a fine one indeed.

Except for a few college papers, no American publication has reprinted all 12 cartoons. Most justify their decision by claiming that a verbal description can convey what the cartoons sought to express, a rationale by which most visual art could be deemed unnecessary. Some European publications have taken a more subtle route, like Belgium’s Le Soir, which declared, “Ceci n’est pas Mohamet.”

How do we live together in a world in turmoil, where words and images have the power to launch riots and justify death sentences, and where self-censorship out of fear can masquerade as sensitivity, just as racist viewpoints can masquerade as an unwavering commitment to “free speech?”

As an organization dedicated to preserving the right of free expression, NCAC cannot endorse the notion that even noxious expression should be suppressed solely because it could be used to provoke violence. More than a heckler’s veto, such a stance would invite violent and lawless action, at the expense of discussion and debate.