Kansas Board of Regents Must Overturn Exhibit Takedown

Previous Next
Kansas Board of Regents Must Overturn Exhibit Takedown

Today the Kansas Board of Regents received a letter (below) from the National Coalition Against Censorship (NCAC) and the ACLU of Kansas and Western Missouri urging the board to restore the art exhibition program at Dykes Library, located in the Kansas University Medical Center. Artists, educators and other local free speech advocates joined the letter.

The decades-old, rotating art exhibitions program was closed at the same time that Dykes Library Interim Director Dr. Vince Loffredo ordered the removal of the current show, “Tom Gregg: Unsold – Grenades, Cute Animals and Bad Apples”, ahead of its scheduled end date. Loffredo cited a “fiduciary obligation to the state of Kansas” and claimed the artwork in “Unsold” did not support the campus’ “core mission.”

“Dr. Loffredo’s actions as an administrator at a public university raise serious First Amendment concerns,” states the joint letter of protest. “The explanation that the artwork is somehow not in line with the campus’ ‘core mission’ is vague and subjective, and as a result opens the door for arbitrary censorship. The fact that a public official may not like a work of art or might disagree with the viewpoint expressed in it is no grounds for him to censor that work.”

The letter goes on to call the decision to censor the exhibition program “constitutionally suspect” and a violation of “well-established principles of academic freedom.” 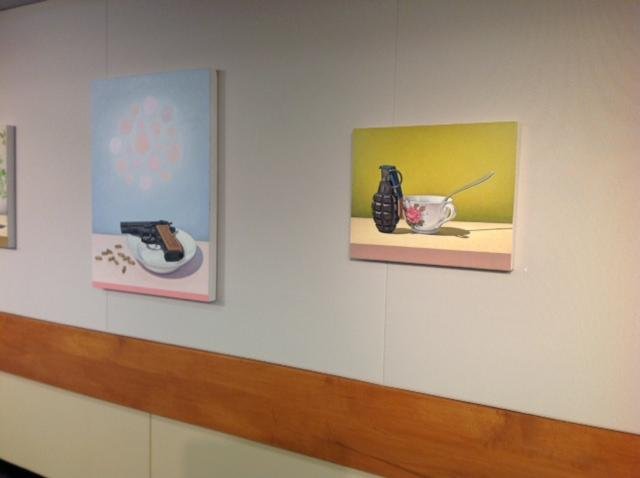 Artists and many other members of the community regarded the Dykes Library series as a successful program, showcasing numerous local talents at an annual cost of only $1000.

The letter suggests a joint exhibit review panel composed of artists, professors and administrative staff to avoid future conflicts, and closes with an appeal to the university’s own stated values:

“For years the exhibition space at the Dykes Library has served as a venue for thought-provoking and challenging artwork. In the past, the University has displayed firm commitment to its own dictum that ‘the freedom to doubt and question must be guaranteed.’ We urge you to ensure it continues to do so in the future.”

NCAC &amp; ACLU Letter to Kansas Board of Regents by ncacensorship