Victory! ‘House of the Spirits’ Stays in Watauga County Classrooms

Previous Next
Victory! ‘House of the Spirits’ Stays in Watauga County Classrooms 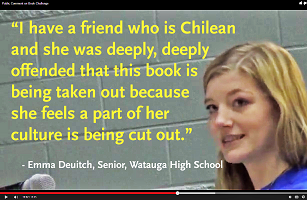 After close to six months of community debate, freedom to read advocates in Boone, North Carolina are breathing a sigh of relief. Last night, a 3-2 school board vote held that Isabel Allende’s The House of the Spirits could be taught again in Watauga County Schools.

The book was set to be taught in a 10th grade honors English class in Watauga High School, by Watauga Teacher of the Year Mary Kent Whitaker. When parents complained about the content of the book, Ms. Whitaker offered students the opportunity to “opt out” and read Moby Dick instead.

Dissatisfied with this option, parents filed a formal complaint about sexual situations in the book and asked that it be removed from the curriculum. Use of the book was suspended. After the challenge was filed, a school media evaluation committee as well as a district reconsideration committee both unanimously upheld the use of the book, stating that it is indeed appropriate for high school classrooms.

In November, NCAC’s Kids’ Right to Read Project sent a letter to the committee advising members on the pedagogical value of the work and the potential constitutional implications of allowing it to be removed because of objections. The letter pointed out that The House of the Spirits is included in North Carolina’s Common Core Curriculum for 10th grade literature and excerpts from the novel appear in Watauga High School’s state-adopted textbook for all sophomores, World Literature (Glencoe). Isabel Allende is a recommended author and this book is a recommended work by the Advanced Placement and International Baccalaureate lists.

Parents continued to push the matter, appealing the district committee’s decision to the School Board.

Students have been very active in defense of the book, though some have also weighed in on the side of removing it. Before the February 27 board vote, they held a read-in at Watauga High School to raise awareness and support for the book. Allende herself has also weighed in on the subject, advocating publicly in defense of the book and Ms. Whitaker. She sent out a video message of support on the day of the board vote as well. North Carolina poet laureate Joseph Bathanti also wrote a letter of support.

Dozens of citizens, parents and students attended school board meetings to speak publicly and share their views about the book. On February 10, the turnout was so huge, the meeting had to be moved to a larger space. You can view some of the public comments in the video below.

In February, KRRP sent a second letter to the school board to urge that they respect the challenge process and accept the decisions of the district’s committees to keep the book. The letter points out that “If objections to sexual content were enough to justify the removal of a book, a great many book would be at risk, including works by Shakespeare, Morrison, Vonnegut, Faulkner, Steinbeck, and Hawthorne.”