Previous Next
Free Speech and PowerPoints in Wakulla County Florida 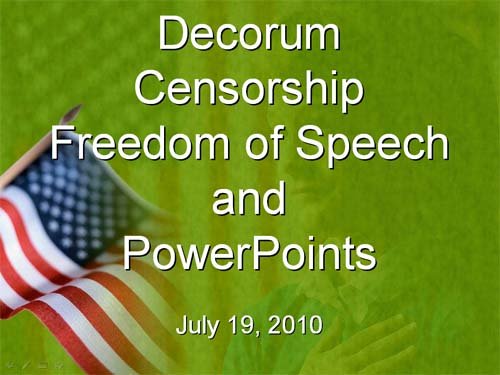 In what appeared to be a retaliatory move against vocal citizen Steve Fults, Wakulla County (FL) Commissioner Mike Stewart proposed to eliminate the public’s use of AV equipment during meetings. (Staff members and invited groups would still be allowed to use the equipment.)

Individual members of the public who wished to speak at county meetings were already limited to 3-minute presentations, but the proposed policy would restrict use of AV equipment as well. The use of PowerPoint and other media had, in the past, significantly aided an individual’s ability to present coherent and effective message to the county board and community. In fact, Mr. Fults recounted several occasions where his presentations using AV equipment had made an impact, much to the chagrin of the Commissioner.

After consulting with NCAC, Mr. Fults presented his PowerPoint presentation at the July 2010 meeting prior to the board’s final vote on the matter. His presentation outlined the importance of free speech and indicated how effective media can be in delivering messages. The board voted unanimously to continue to let citizens use AV equipment during meetings.