Labor Art Censored? Canceled Mural Controversy at the Museum of the City of New York

Previous Next
Labor Art Censored? Canceled Mural Controversy at the Museum of the City of New York 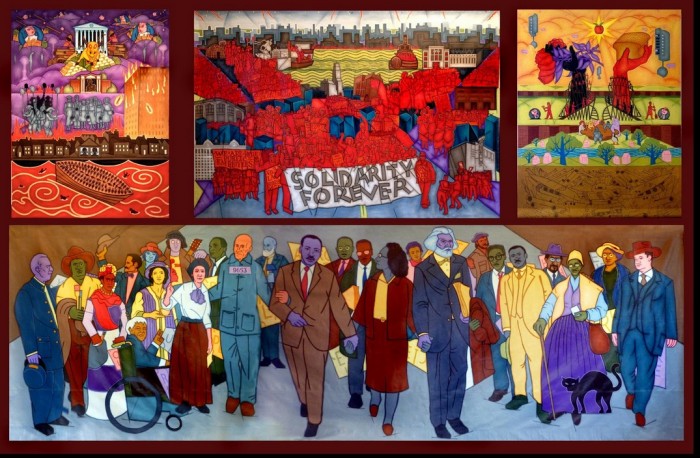 Eighty-one years ago this week, Diego Rivera's Man at the Crossroads mural–after months of intense controversy over its celebration of workers' rights and socialism–was destroyed in the middle of the night by workers at Rockefeller Center.

Can pro-labor artwork still provoke controversy? And are politically-motivated curatorial decisions made by museums the same as censorship?

Those are some of the questions being raised about the Museum of the City of New York's refusal to display a mural that had been commissioned for a gallery dedicated to the history of social activism. The controversy raises provocative questions about artistic freedom and the role of museum curators as arbiters of what ultimately appears on their walls.

In 2008, artist Mike Alewitz was invited by the Puffin Foundation to create a mural for the inaugural exhibition of the Puffin Gallery for Social Activism at the Museum of the City of New York (MCNY). The mural, The City At the Crossroads of History, was presented in conceptual form at a joint meeting with the foundation, the gallery's advisory committee and museum representatives in late 2011.

Alewitz's mural presents an unapologetically left-wing, pro-labor viewpoint. It depicts the slave trade and the Triangle Shirtwaist Factory Fire, and references citizen movements across the city's history. But MCNY Chief Curator Sarah Henry reportedly raised concerns about some of the views expressed in the piece, saying it did not express the full "diversity and conflict inherent in New York City history." There were also concerns about a section of the mural titled "Another World is Possible," which imagined a utopian vision of peace and shared prosperity.

The concerns were followed by suggestions for possible alterations to the work. Among these were adding in other figures from New York's activist history–in some cases people whose politics sharply diverge from the themes in Alewitz's piece.

Alewitz responded with a long letter explaining his vision, and arguing that certain suggestions about how to alter or edit the piece did not make thematic or editorial sense. He apparently received no response. In 2014, the mural was completed, but MCNY decided it would not show it.

For months the museum did very little to explain its decision. In September, the National Coalition Against Censorship wrote a letter to MCNY director Susan Henshaw Jones seeking some clarity about the situation, and suggesting a possible solution: A revolving display of artworks that could illuminate the diversity of New York’s political viewpoints and would fully satisfy the museum’s objectives. The museum never responded.

In mid-January, Jones released a statement explaining that Alewitz's mural "did not meet the curatorial standards or purposes of the museum." She added that the piece "was commissioned by the Puffin Foundation, not the museum, and the museum never promised to install the work.” Allegations that MCNY was censoring his work are "quite wrong and deeply offensive," explaining this as a "decision not to install a piece inconsistent with our mission."

We support museum curators as the final arbiters of how and what is presented in their institutions. And a difference about artistic or thematic vision is not the same thing as censorship. But the difference in this case appears to be solely about the politics of the mural, and the museum's reluctance to be associated with pro-labor political views. And this is disturbing.

Prominent labor activists and historians have joined Alewitz in calling for the museum to display the work. As their petition states, "To deny our legacy, in a gallery that purportedly represents the tradition of social activism, is an insulting slap in the face to activists, artists, unionists and all those whose work contributes to the prosperity of the city."

NCAC urges the museum and the Puffin Foundation to open a conversation about how this mural, which depicts the struggles of radical labor and civil rights movements in our society, can be presented to the public.