The Censored Truth of a Guantanamo Prisoner

Previous Next
The Censored Truth of a Guantanamo Prisoner

Published in January of this year, The Guantanamo Diary is an intense account of Mohamedou Ould Slahi’s excruciating experiences as a prisoner of the U.S. war on terror. Slahi was detained in his native Mauritania in 2001 before a CIA rendition plane flew him to Jordan for brutal interrogation sessions. From there, Slahi was flown to Afghanistan and then finally to the infamous Guantanamo prison camp, where he remains today. He has never been charged with any crimes.

Slahi’s diary was edited by NCAC board member, writer and human rights activist Larry Siems. But as he notes, he was the second editor. The book was edited “first by the United States government, which added more than 2,500 black-bar redactions censoring Mohamedou’s text…. These redactions are changes that have been imposed on the text by the same government that continues to control the author’s fate and has used secrecy as an essential tool of that control for more than 13 years.”

We spoke with Siems this week about the process of editing a censored text, and about how the government’s censorship ultimately fails to blunt the impact of Slahi’s narrative.

He wrote the book in 2005, about a year after his “special project interrogation” ended. And he wrote it during a period when he was finally allowed  to meet with attorneys. He actually greeted his two original attorneys, Nancy Hollander and Sylvia Royce, at their first meeting in March 2005 with a notebook that had about 90 pages in it. And they were able to meet with him more throughout that summer and fall; as they would visit he would give them more pages, and that grew into this 466 page hand-written manuscript.

And like everything in Guantanamo those pages were taken to Washington and locked in a secure facility where they are accessible only to the attorneys who have top secret security clearance. They’re considered classified like every other utterance from every other Guantanamo prisoner is just presumed classified from the moment that it’s created. 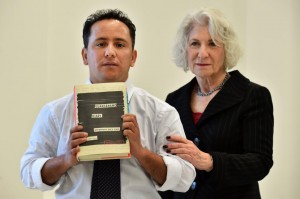 So it sat there, accessible to them because it was considered an attorney-client privileged material, but classified for almost seven years. And during that time Nancy Hollander and her legal team conducted litigation and negotiation behind the scenes to get the book declassified and cleared for public release. And that’s a two stage process around Guantanamo: There is declassification, and then as part of this byzantine and quite thorough censorship regime that surrounds Guantanamo, there’s another status called “protected” status. So even things that are declassified are still within protected status, and they have to go to yet another process of redaction before they’re cleared for public release.

So his attorneys carried out that process vigorously over a six-and-a-half year period to get the manuscript cleared and released. Finally in the summer of 2012, it had made that last hurdle of going through the last redaction process and they were able to hand the PDF of the document to me in its public, cleared form—which includes all redactions.

It’s an interesting psychological phenomenon. When you put a black bar over something, the person who sees that black bar is compelled to think about what’s behind it, right? It’s an automatic reaction. And I think especially when we’re talking about government secrets—whenever we’re confronted with black boxes that have been imposed by our government, as citizens part of our duty should be thinking about what’s being withheld and why. 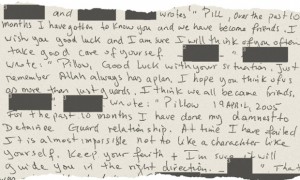 That said, I made no effort to peer through the black bars or to uncover classified material or anything like that. All I did was, I lined his account up against what was by 2012 a substantial pile of declassified government documents and other documents in the public realm that recounted his odyssey through this gulag of detention sites around the world, and ultimately this special interrogation at Guantanamo.

So I think part of it was a process that I went through as I read the manuscript, learning to trust him as a storyteller. And a lot of that trust came from comparing his version of events to this trove of declassified documents. And it became clear immediately when I was looking at the manuscript what an accurate historian of his own experience he is.

So in a sense the footnotes and the annotations are a record of my experience of looking at his account against this enormous documentary record that we have. For example, he describes being dragged into a room, the temperature is turned down, he’s shackled, and the interrogator turns on the strobe lights and starts blaring the heavy metal song “Let The Bodies Hit the Floor.” Well, we know from the Senate Armed Services Committee report, we have an account of that happening; that’s documented because in the interrogator’s own report of a certain day they described that scene.

And then there are other redactions that aren’t plot-based, but are based on trying to obscure some of the emotional content. There is a place where they seem to redact the word “tears” when he says he cannot help breaking in [REDACTED].  And there are some attempts apparently to obscure the fact that some of the interrogators are women—they habitually try to redact the pronouns that refer to female interrogators—”her and she.”

So the footnotes and annotations are the thought processes that I think any reader goes through when they are again confronted with a blank, and with that psychological imperative of trying to figure out, well what’s being kept from me and why.

What’s interesting is that censors are just human beings. This is a human being who’s sitting there with a literal or metaphorical Sharpie and drawing black lines through text. And like all of us, you make mistakes, you’re not consistent, you lose track of things, you might do some things impulsively. So in some sense it reflects the fact that even in the most bureaucratic of processes it really comes down to individuals who are assigned a task and have quirky individual responses to that task.

As far as the motivations in general: For me the black boxes as a whole, the reason it was important to preserve them in the text, is that they are kind of the fingerprints of a much larger censorship regime that’s been imposed on Mohamedou and his story for many years.

The motivation writ large is that there has been an aggressive attempt to suppress his story for many years. And then when the manuscript was released in 2012, I think it was released in large part because so many documents had been released by that point that told the story of his abuse and torture that the government could no longer say that his experience itself—and his expression of his experience—was a state secret. The details of what he was saying were already known.

So it became impossible for them to suppress the truths that are contained in the manuscript. But the impulse to try to limit the damage of those truths remained. So I think, aside from the obvious redacting of names—which almost surely aren’t names, but pseudonyms—I think that the redaction process is just the vestiges of this much more pervasive kind of process of trying to suppress this man’s story.

And that’s his accomplishment as a writer. His voice is so strong, his approach to his experience is so nuanced and empathetic and at some key moments, forgiving. So there is something about the emotional pitch of the work as a whole comes through despise the redactions. 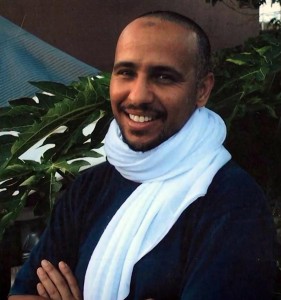 His account is an experiential account above all. He says at one point, I’ve just tried to recount my experience, I’ve tried neither  to exaggerate, nor to understate. And he proves to be an incredibly reliable narrator of that experience. Through that narration and through his approach we really begin to understand what this torture program means in human terms. That’s what’s really groundbreaking in this book.

We talk about government censorship, but I think we’ve all culturally as Americans done a significant amount of self-censoring around the subject. The government has imposed this black box of censorship around Guantanamo. And then in our own minds, I think we’ve even drawn a curtain around that black box, and we’ve shied away from trying to pry into it. We can no longer pretend that we don’t know that torture happened, we can no longer pretend that we don’t know that terrible mistakes were made that cost many men years of their lives. These things have been well-established by the record for quite some time. But I think we’ve been reluctant to probe into them because we know that we’re talking about a world of pain and terrible human mistakes, and that’s fraught area to wade into.

But what’s amazing about Mohamedou’s book is that he draws back the curtain, and his voice compels us to experience what it was. But he does it in a way that makes clear that actually the way forward is not to continue to block this off, to curtain it off, but to talk about it, to engage with it, to recognize the experience, but also to see the complexities and sometimes the redemptive moments that happened even in that really dehumanized environment.

Obviously it’s a first-hand account of what it means to be subjected to years of extreme human rights abuses, from enforced disappearance through extreme torture. But it’s also this incredible portrait of the cost of those programs and policies on the men and women who are asked to carry them out. And I think you can draw back that curtain—that curtain blocking the experience not only of prisoners, but of the men and women who we ask to carry out these policies.

We know from years of literature and experience of countries that have emerged from periods of torture that it damages not only the people who are tortured but the people who torture. And this book really vividly portrays the cost of these terrible policies not only on the prisoners, but on the captors too.