Managing Controversy: Vanessa Place, Race and Gone With the Wind

Previous Next
Managing Controversy: Vanessa Place, Race and Gone With the Wind 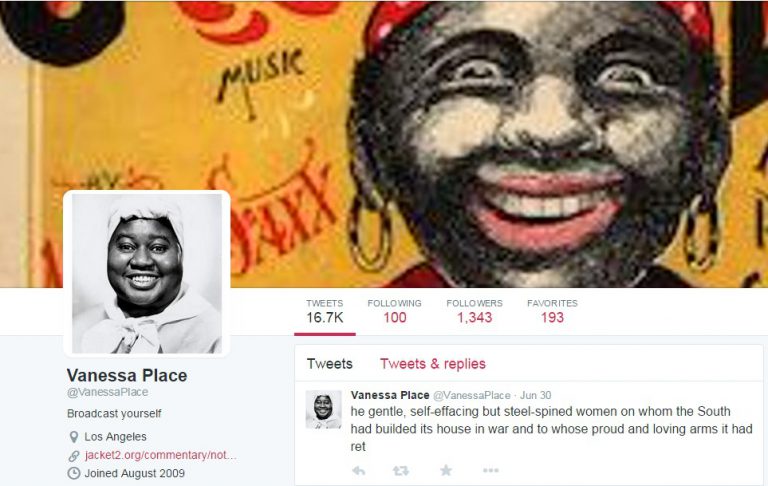 The National Coalition Against Censorship (NCAC) has joined with artists and poets to express concerns about how arts institutions have dealt with a controversy surrounding conceptual poet Vanessa Place.

Place, whose work is often provocative, has been attacked over a long-running project tweeting the full text of the novel Gone With the Wind. Place's critics contend that the project is a racist appropriation; Place has argued that she is actually commenting on the racism of the novel.

Place's critics went further than simply critiquing her work. They launched a petition to an academic conference associated with the Association of Writers and Writing Programs (AWP) to remove Place from a program subcommittee.

Surprisingly, the AWP complied. Since then, the Berkeley Poetry Conference scrapped its entire program, seemingly in connection to Place's presence, and an event at the Whitney Museum that included Place was canceled.

The NCAC statement does not take a side in any of the arguments over Place's work, or her defense of it. The most important issue is how institutions have failed to adequately deal with the controversy. As letter argues:

The cultural atmosphere evidenced by the events around Vanessa Place is chilling to any creative artist or institution that may consider approaching difficult questions around race, sexuality or politics. It makes real debate about emotionally charged issues over which we often disagree nearly impossible. Unless they develop strategies to manage conflict and disagreement productively, cultural institutions will operate as echo chambers under the pall of a fearful consensus, rather than leaders in a vibrant and agonistic public sphere.

Even those who might agree with the political goals of the groups mobilizing against Place should consider the effects of their actions:

Not only is silencing and suppression dangerous for the culture at large, it does nothing to confront the realities of racism. Censorship has never contributed to the cause of social justice; throughout history it has invariably been on the side of totalitarianism and repression.