Previous Next
Is Reddit Moving Away from Free Speech Roots?

The early days of the internet were a bit like the Wild West, an online environment that was a haven of anonymity and completely unfiltered speech. There was the good, the bad, and the ugly; but just like the Wild West, social pressure and corporate influence have begun to change this landscape.

In the wake of Twitter changing its harassment policy, Reddit followed suit, instituting a ban on five separate subreddits, the most active of which (r/fatpeoplehate) had 151,000 subscribers.

Reddit has been heralded as “the front page of the internet," toting claims of unfiltered speech, hosting thousands of smaller self-moderated communities (subreddits) which discuss any number of topics. Previously, there was no limitation on what users could post, but now it seems Reddit is making a departure from their previous commitments. You can find a full list of the banned communities here.

So what does this mean for free expression?

In general, attempts to censor content often do just the opposite. Reddit banning certain groups will inevitably just spawn more users with a renewed zeal to whatever their “cause" might be. Many of the banned communities would be hard to classify as anything other than hate groups; but now, instead of being full of anonymous names criticizing fat people, r/fatpeoplehate can claim to be victims. As a private company, Reddit can do what it wants on its platform. But what are the effects of banning a small number of discussion groups?

YouTuber Boogie2988, a “vlogger” and self-described armchair philosopher, is no stranger to Reddit’s fat hate, with Redditors making threads to ridicule his weight daily. In one video, he discussed Reddit’s actions

To see this happen is surprising to me because I would rather have freedom of expression and freedom of speech. I would always rather we have the ability to discuss unpopular things, but that’s not even what I’m upset about. That sucks, but that’s not what I’m upset about. Number one, I’m upset that this is such a half-measure. Because there are plenty of harassment subreddits that are left over. Coontown comes to mind.

It turns out that r/coontown is a subreddit dedicated to the hatred of black people— a place where you can find people lamenting Hitler’s downfall, comparing blacks to apes, and other awful stuff. And  r/coontown has 15,400 subscribers, placing it in the middle of the list of the top 5,000 subreddit rankings.

In their statement following the ban, Reddit gave this reasoning: “We will ban subreddits that allow their communities to use the subreddit as a platform to harass individuals when moderators don’t take action. We’re banning behavior, not ideas.” 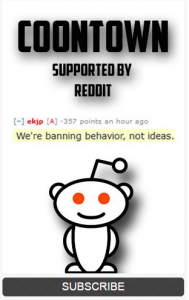 This statement pertained to r/fatpeoplehate in that group members used Reddit to organize attacks on other websites–the idea that speech crossed over into other forms of actions. But there are some problems with this defense.

While Reddit claims to be "banning behavior, not ideas," in practice the result is the same: r/fatpeoplehate was banned for generating too much negative attention, and perhaps scaring off the potential advertisers the company is seeking to attract. Does this mean that anything generating enough negative attention for Reddit will be dropped? Given the very passionate criticism of Reddit's actions coming from some of its loyal users, it is hard to fathom how Reddit will survive as a haven for unmonitored speech.

And once you start banning subreddits, all of the communities that are not banned (r/coontown among them) are in a very real sense validated. Due to their intervention, Reddit has arguably now “sanctioned” non-banned subreddits. Check out the image on the left from r/coontown’s main page.

As is often the case when people resort to censorship, nothing has been solved. In fact, this move has made the situation on Reddit far worse. Boogie explains:

Reddit has done me no favors today. They didn’t make it more comfortable for me to use the website because the front page is filled with fat hate. They didn’t allow me to express myself better. In fact they limited my ability to express myself. They did not ban enough subreddits to make it a full measure, so what’s even the point at that point? And ultimately it’s not going to make it any easier to be a fat person because these people are still going to hate me. So what was the point of all this?

If this was a gesture to make Reddit appear friendlier to potential advertisers at the cost of their commitment to unmonitored expression, it seems to have backfired.