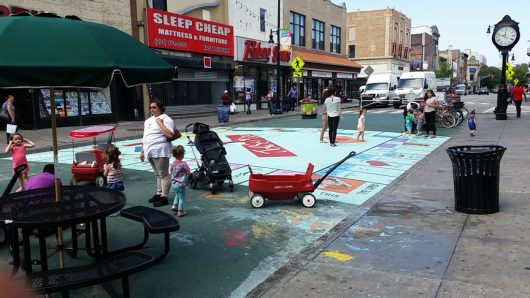 The Monopoly Board in Jersey City

In May, the Jersey City Mural Arts Program commissioned local artist Gary Wynans, aka Mr. AbiLLity, to create a 33-foot floor mural on the busy pedestrian plaza at Newark Avenue. A creative riff on the traditional Monopoly board game, Wynans’ mural uses Jersey City street names and local icons, harnessing the game’s focus on money and real estate to bring attention to income disparities and gentrification in real-life Jersey City.

Several parts of the mural drew complaints, but the “Jail” square containing the artist behind bars provoked particular ire. Some residents, including state Assemblywoman Angela McKnight, saw not the artist’s self-portrait (Mr. Wynans is Italian and Puerto Rican), but a negative stereotype about people of color, and demanded that it be removed or changed.

NCAC has written a letter to Mayor Steven Fulop expressing our concerns about the lack of clear public art selection and review process in Jersey City. It also highlights the issue of how the City feels forced to respond to complaints in an apparently arbitrary manner, censoring artworks it has already approved. While we wait for a response, NCAC sat down with Mr. AbiLLity to learn more about his perspective, the story of the mural and what went on when he began painting it.

NCAC: Tell us a little about yourself as an artist. How did you come to be “Mr. AbiLLity”?

GW: I’ve been an artist as far back as I can remember. In my youth, I would draw my favorite cartoons, then, in high school, I started to become rebellious, I got into hip hop…. I picked my name “AbiLLity” searching through the thesaurus under the word “skill”. And I had always loved using the word “ill.” I feel if you’re calling something ill, it’s a certain level of awesome, reserved for only some of the dopest. So, AbiLLity was born. Later I would put positive, silly and inspirational quotes around town, paint hearts and peace signs and always sign it with “ill.” After a while, people began to recognize the little symbol I signed with.

NCAC: Tell us about your original idea for a Monopoly board. How is it different from the traditional game board?

GW: Everybody recognizes Monopoly, and I thought putting a Jersey City twist on it would be cool to all the locals who could relate and understand what I was doing. I put all parts of the city in it.

The city is currently divided between the “Old” Jersey City and the “New” Jersey City. So half of the board I kept Old Jersey City, aka “the hood,” and the other half is the parts of town that are being developed. Jersey City has everything from homeless to yuppies, from projects to condos. Since Monopoly is divided by the same principle of wealth, it made perfect sense to keep with the theme.

NCAC: How did you get involved with the Jersey City mural program? How was your Monopoly board chosen? Did you have to change the original idea to fit the City’s requests?

GW: I had posted the [Jersey City] Monopoly drawing on Facebook, and Brooke [Hansson, Director of the Jersey City Mural Arts Program], who is in charge of the mural department at City Hall, said we should make it a mural. Of course I agreed! Knowing that the city was about to pay me to make this on a grand scale, I knew certain things would have to be changed. My thoughts were: the cop-as-a-pig sending me to jail would have to be altered, and the random weed references sprinkled throughout the board would probably have to be removed. I’m okay with that, because this had grown from a personal piece to a large-scale commission.

Upon meeting with Brooke, I had to change a few more things. I found this to be pretty silly, but the goal was to avoid people’s hypersensitivities. First thing that got the axe was the names of the projects. When I asked why, I was told “it’s offensive to display the projects as a low income area,” as if the people living there don’t know! I was told that putting Martin Luther King Drive (another low income area) next to the box with the Jail was insensitive, and I had to change the low-income squares from their original monopoly color of brown, because brown for the projects was insensitive. So they’re purple now. Also, the term “Gentrification Tax” would offend people, I was told. So I suggested calling it “Hipster Tax,” and that was accepted.

NCAC: Tell us about the location for the mural: is it a good spot?

GW: The location was actually perfect. The cross streets are the two high-valued properties on the game board. I used those streets as examples because everything there is newly developed. Downtown is the definition of the New Jersey City where the new residents (who are typically New Yorkers who can’t afford New York City) are taking over, kicking out the people who can’t afford Jersey City anymore.

NCAC: How did passersbys respond to your work? As a long-time resident of Jersey City, did you expect your work to be controversial for any reason?

GW: As I was painting, people would interact with me, and that was the icing on the cake, because I received so much love while being out there. It took a month to complete the mural, so I learned the faces of the folk who lived on the strip, and many of them were kind and supportive. Most of the love came from children who didn’t even know what Monopoly was, but still enjoyed it, and they frolicked all over the board with gigantic smiles. Also, the elderly who had played the game when they were children fell in love with the whole idea.

I did however get a few Negative Nellies while out there. Every time somebody complained, I would receive a phone call from Brooke [Hansson] telling me the next thing I had to change – all this happened after she had approved the mural and all the details. For instance, there was a complaint about the words “cool statue” above the image of a statue that all the locals recognize. I don’t know what it represents or who the guy getting stabbed in the chest is on that statue, but it certainly looks like an awesome statue. People said that it was disrespectful to the Polish people who lost their lives that the statue symbolizes. I had to change “cool statue” to its official name, “Katyń Memorial.”

On almost my final day out there, I ran into a fella named Paul. He asked me if I could put his name on the mural. I jokingly asked his name and said I’d add “Paul Avenue” right away, and just continued to work. He stopped me again and said, “No, I meant my company.” This guy wasn’t joking! I told Paul that all the squares were already taken, and that City Hall had made the decisions quite some time ago. He then got on his phone for about ten minutes. Fifteen minutes later, Brooke called me. “How can we incorporate ‘Charles & Co.’ on the board?” she asked me.

What the hell is “Charles & Co.”?  Well, apparently they’re the company that has been building condos, and they help out the city with funding. Sponsored squares. Wow, is this what its come down to?  I would have calmly explained what a terrible idea that is, but at this point the butting of heads had peaked and no rational discussion could take place. Paul got his square. Take a chance on Charles & Co. Know you know who’s really in charge of your fine city. And my heart broke. 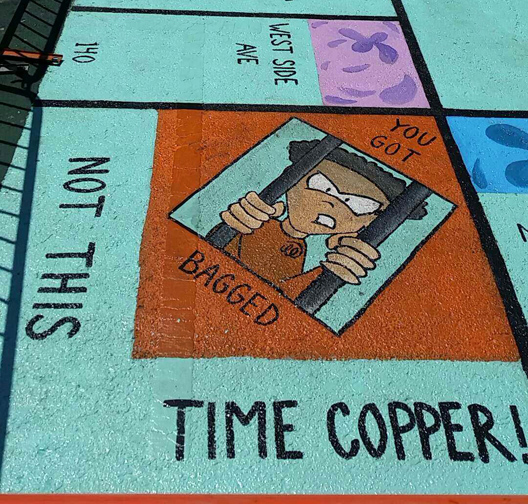 NCAC: One part of the mural became particularly controversial, what was that about?

GW: People began to ask about the colored fella in the jail. I explained it was me, and after more people asked, I posted on my social media that it was me. I even threw in my name tag “ill” on the character so they could figure out that it was me. This did not stop some people from being upset. When I explained those who were physically there, most seemed to understand. Some still seemed a little concerned, and others could care less about anything I actually had to say about it.

Brooke told me people were complaining and protesting, and that if we wanted to preserve the jail character I had to put out an artist statement. I had already done that and put it out on social media. Soon after, Brooke told me the jail square would have to be painted over, mentioning threats to the program’s funding. So, the City had my self-portrait removed from the jail. (I wish they had come to my rescue the time when it actually happened, lol). What remains now is just an orange square. 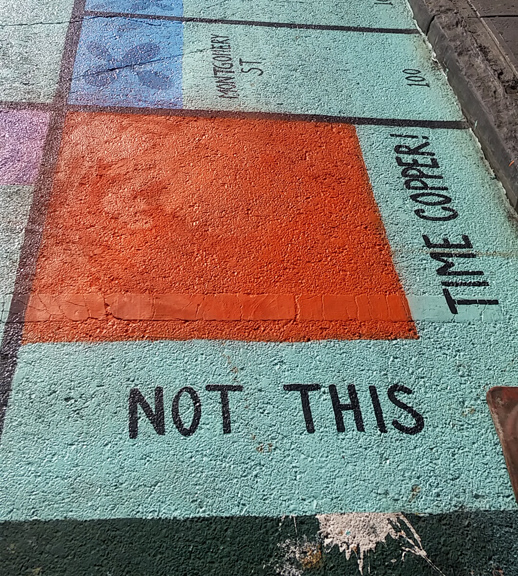 Post script: Mr. AbiLLity wanted to make clear that while the experience has been unfortunate, it has been one in a lifetime and he feels grateful to have had it.  He extends his thanks to everyone who was supportive throughout the project.