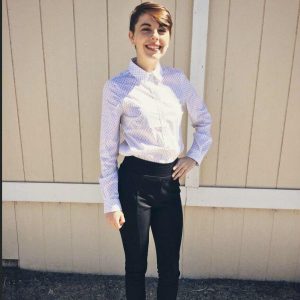 A student in Colorado who criticized her public school’s religion-orientated educational policies found herself ostracized and punished by her teachers. Last Friday, NCAC spoke to recent Delta High School graduate Cidney Fisk on the phone about her experiences. She explained how her high school has long attempted to prevent her from speaking out on controversial issues.

Ms. Fisk was shocked when her grade in student government class suddenly plunged from 98% to 70% midway through her senior spring. She said that her teacher, John Miller, gave her three months of failing grades after she asked guest speaker Chad Williams about his professional qualifications and his personal objectivity in discussing drug abuse . According to Ms. Fisk, Williams, a retired Navy SEAL and author of Seal of God, a book in which Williams ties his military experience to his Christianity, honestly and fairly answered her question. Mr. Miller, however, was unhappy with Ms. Fisk’s attitude and questioning of authority. After Ms. Fisk and her parents emailed Mr. Miller and the school principal to find out what happened, they were told that her grade would return to normal only once she had reined in her behavior.

A similar incident occurred during her junior year. On Halloween, Ms. Fisk wore a trash bag to protest Amendment 67, a statewide referendum intended to expand the legal definition of a person to include fetuses. Her math teacher Renee Cronenberg chose to condemn the costume in front of her class, informing Ms. Fisk that God gives life to babies and that abortion is murder.

Delta High School also sought to interfere with Ms. Fisk’s use of social media. On Instagram, she condemned her school for spending money on microwaves and athletic equipment rather than sorely needed academic supplies. She posted a picture of herself in a school sweatshirt on her Instagram page with the caption #notactuallyafan. Mrs. Cronenberg discovered Ms. Fisk’s private online comments and asked her to delete the image. After Ms. Fisk refused, the school counselor warned her that if her “negative attitude” continued, she would risk losing her letters of recommendation for college applications.

Ms. Fisk, an outspoken atheist, also believes that her view on religion resulted in unfair treatment from her peers and teachers. Earlier this year, the school invited guest speaker Shelley Donahue to lecture on sexual education (according to her website, Mrs. Donahue is “passionately committed to Jesus Christ as the ultimate answer to the teen sexual activity problem in America”). At the event, Mrs. Donahue compared sexually active women to used tape and dirty diapers. Ms. Fisk and her friends wore t-shirts with slogans such as “I abstain from ideology” and “Real control is birth control” to the speech, protesting against what they perceived as an offensive and religiously indoctrinating talk.

Community members reacted angrily upon learning of Ms. Fisk’s atheism from the local newspaper the Grand Junction Sentinel’s coverage of Mrs. Donahue’s talk. One fellow student, for example, threatened that atheists would “end up in a body bag,”

Ms. Fisk expressed concern that her sabotaged student government grade will jeopardize her financial aid at the University of Denver. “The attempted and somewhat successful censorship I faced at my high school is an atrocity that I would never want to see anyone else go through,” she told NCAC.

NCAC is seriously concerned about Delta High School’s unjust treatment of students like Ms. Fisk who express minority viewpoints. We are closely monitoring Ms. Fisk’s case and are working to ensure that future students at Delta High School are not subjected to similar punishments for voicing opposition to school policies. Stay tuned for updates regarding any further action NCAC takes.