Threats to Blows: We Stand with Illma Gore

Previous Next
Threats to Blows: We Stand with Illma Gore 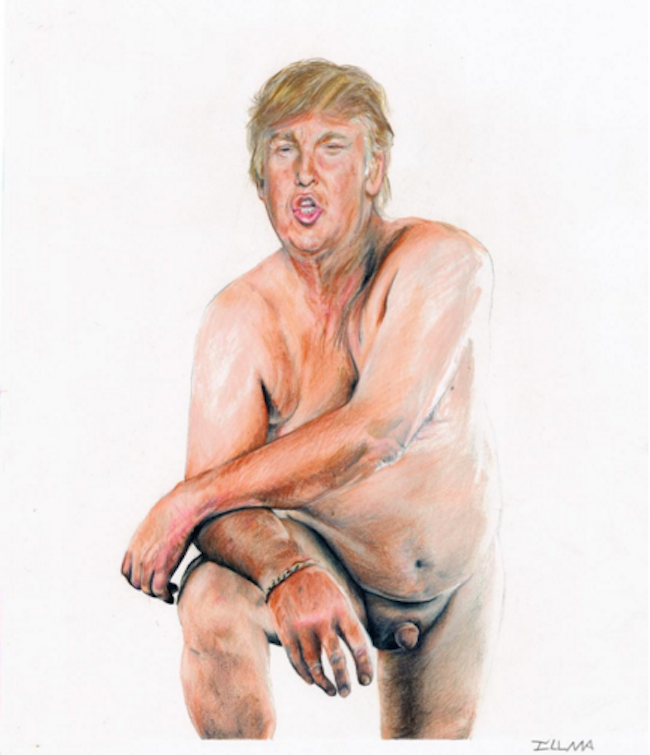 On Saturday, in the latest fallout over artist Illma Gore's controversial nude portrait of Donald Trump, Gore was physically assaulted by a Trump supporter not far from her home in LA. After punching the diminutive artist in the face, her attacker shouted "Trump 2016" and jumped into a waiting vehicle. Gore posted the story on her Instagram feed, and filed a police report, which she sent to The Daily News. Her assailant was with "a group of guys in the car," Gore told the News. As noted in Artnet coverage of the incident, protesters at Trump's campaign rallies have routinely been assaulted, while Trump has encouraged the violence and offered to pay perpetrators' legal fees.

We stand by Illma Gore along with all those who speak out in the face of violence and intimidation. We stand in defense of her civil rights, which have been violated by cowardly actors whose ignorance and thuggery have no place in an open society.

For those unfamiliar with the story, the contested painting, shown above, is titled "Make America Great Again" in sarcastic reference to the GOP frontrunner's campaign slogan. The artist received death threats when she posted the image on Facebook in February, after which it went viral. The image has been subject to indiscriminate censorship on social media, forcing the artist to crop it or scramble Trump's micropenis. Maddox Gallery in London agreed to exhibit the portrait that broke the Internet when no US gallery would. If sold, proceeds from the work, which has been valued at £100,000, will benefit Safe Place For Youth, a homeless shelter for adolescents in Los Angeles. However, Gore has been anonymously threatened with legal action in an attempt to prevent the sale.

Gore writes: "Please stop glamorizing and perpetuating violence. Make America Decent Again!"  And: "I am not deterred by this. Thanks for everyone's support. If anyone saw anything on La Cienega on Friday, please let the local authorities know. Black Honda Civic with a group of people in the car."

Today I was punched in the face by a man who got out of his car and yelled, "Trump 2016!" in Los Angeles, just days after I returned home from London just down the road from my house. Though I encourage passion, opinion and emotion, especially though art, I think violence is disgusting. To live in a place where Facebook has given my address to an anonymous third party makes me feel like I am homeless again. This type of violence makes creatives feel like we live in a world where our individual creative input isn't safe. I am sad that this is the state of our America right now. I am sad that Trump, and many of his supporters, don't find words enough to express their opinions – they need walls, waterboarding and punches. @realdonaldtrump Please stop glamorizing and perpetuating violence. M