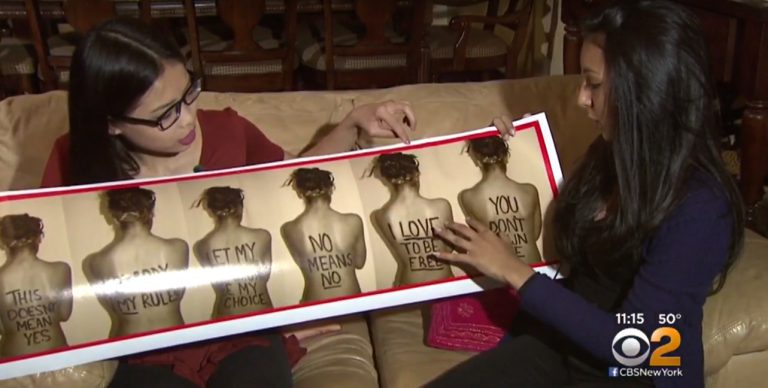 When students at Susan E. Wagner High School in Staten Island produced a photographic artwork critiquing rape culture and the sexualization of young women’s bodies, the administration responded by removing the artwork, implicitly sexualizing the body of a young woman.

Last week, a photo-collage was removed from a student exhibition in the lobby of the high school due to its depiction of a young woman’s bare back. Students informed the local press that Principal Gary Giordano decided to prohibit the display because the student who modeled for the photo was a minor, despite the fact the image is patently non-obscene and non-pornographic. Students and parents alike are outraged by the artwork’s removal. To protest the censorship, students circulated a petition at school, and then an online petition was created. So far, the two petitions have garnered over 1,500 signatures and comments.

The story started with an assignment in photography class: Create an artwork that focusses on a social issue. Meghan Callahan-Scarcella and Andrea Gonzalez, classmates and best friends, chose to collaborate on an idea that would address sexual consent and rape culture. Callahan-Scarcella shot a photograph of the bare back of Gonzalez, and together they manipulated the image, adding different messages: “No Means No,” “You Don’t Own Me,” “My Body, My Rules,” and so on.

At first, the administration justified removal of the work with the bizarre claim that it was a violation of the school’s dress code. Later, in a meeting with Student Government, Principal Giordano explained that the age of the model in the photograph (Gonzalez is 15) was his reason for removing it. Callahan-Scarcella and Gonzalez have since agreed to re-shoot the photograph with Gonzalez wearing a t-shirt, over which the same messages will appear. The revised work will be returned to the exhibition.

On the heels of this compromise, the online petition was updated:

…hopefully this powerful photo can help children of this generation understand and see the hyper-sexualization of people and the realization that rape culture does exist in our society. Rape culture normalizes the sexual harassment of all people, not only females.

When interviewed about the controversy, fellow students objected to the censorship and defended the artwork as a positive step in opening up discussion, something they believe should be encouraged, not hindered by the school.

Nor did they take this violation of their First Amendment rights lightly:

“They are teaching students to be photographers and artists, and art is about expression, so why do we have a program if they’re going to censor our expression?” asked freshman Nicole Pizzimento.

Grace Hall, a sophomore, pointed out the obvious double standard: “The whole point is that girls are over-sexualized, and rape culture’s a thing and it shouldn’t be….The fact that they took down a picture with the girl’s back in it — that’s all that’s showing, and important messages on her back — that they took it down because of “nudity” is just ridiculous. If it was a boy’s back they wouldn’t have, it would have been fine.”

In order to satisfy the legal definition of child pornography, an image of a minor must depict sexually explicit conduct or the “lascivious exhibition of the genitals or pubic area.” By suppressing the expression of its students, Wagner High arguably has violated their First Amendment rights and interfered in their training as artists.

Meanwhile, it has imparted an unmistakable civics lesson to these young female citizens: if you want to speak out publicly and lawfully on an issue of grave public concern, make sure you do so without displaying your body.

Update (May 11): NCAC has sent a letter of protest to the school’s principal. Read it below or in full-screen here.