In a landmark case heard in Federal district court in Brooklyn, a judge has ruled that a New York real estate developer must pay millions in damages to a group of 21 graffiti artists to compensate for destroying their work. In early November, a six-person jury handed a preliminary victory to the artists, finding that the real estate developer broke the law.

The artists sued the developer for violating their rights under the Visual Artists Rights Act of 1990 (VARA), which protects the “moral rights” of visual artists.  Among the rights granted by VARA to creators of works that fall under its protection is the right to prevent any destruction of a work of recognized stature. Prior to this lawsuit, the application of VARA to the work of exterior aerosol artists, a traditionally transient art form, had not been tested in court. VARA provided protection only to paintings, drawings, prints, sculptures, still photographic images produced for exhibition and produced as unique editions or in limited editions of 200 or less.

The developer, Jerry Wolkoff, bought the derelict 19th-century Neptune Meter factory in Long Island City, Queens in the early 1970s, spurred by the idea that the waterfront manufacturing neighborhood would eventually become ripe for developing luxury properties. He started leasing the space as artists’ studios in the 1990s, and soon the space was transformed into a major international hub for high aerosol, or spray-can art: “The Institute of Higher Burnin’.” In 2002 it became known as 5Pointz, signifying the five boroughs. The complex interior was occupied by about 200 artists’ studios, and graffiti burners (an elaborate piece said to be “burning” off a wall, billboard, or the side of a train) covered indoor hallways and every exterior surface of the complex: its outside walls, rooftops, loading dock, air shafts and the very trucks parked outside.

5Pointz stood only a few steps away from MoMA PS1 and SculptureCenter, and as the neighborhood gentrified, 5Pointz become a prominent tourist attraction. In 2013, while impatiently waiting for permits to demolish the building, Wolkoff jumped the gun and whitewashed the entire complex in the dead of night without warning. The artists filed suit.

In a 100-page decision handed down Tuesday, Judge Frederic Block awarded $150,000 for each of the 45 works for a total award of $6.75 million, the maximum damages possible. The decision is a decisive victory for the artists, and represents a watershed moment for street artists. The legal import of this decision is that similar disputes and damages can be avoided if artists and landlords, who agree to install and exhibit street art on private property, sign written agreements about if, when and how the art may be altered or destroyed. 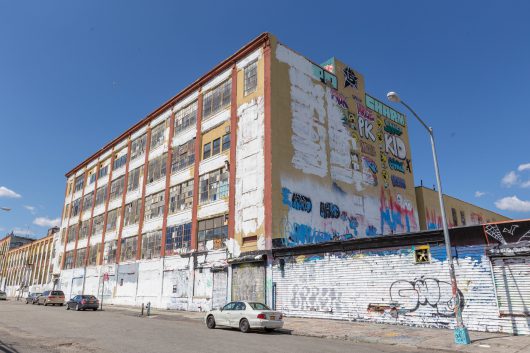