A Brief History of the Censored Oscars

Previous Next
A Brief History of the Censored Oscars

Every year, tens of millions of people watch the Oscars on television — last year’s 86th Academy Awards attracted 43 million viewers in the United States, the most in 10 years — and the ceremony is broadcast in over 200 countries. But that does not necessarily mean that everyone all over the world sees the same show, thanks to various state censors that omit, mistranslate, or mute objectionable speech. It also does not mean that attendees always say what they want to, as they self-censor their speeches to avoid certain taboo topics.

As the awards approach this Sunday, NCAC counts down some of the most egregious cases of censorship in the history of the Oscars as a reminder that the show, like the films it celebrates, should always be an open and free platform for people to speak out and raise awareness about important issues.

As the night’s first award winner, Jared Leto set the tone for last year’s Oscars when he gave a poignant and moving speech after receiving Best Supporting Actor for his role in Dallas Buyers Club. At a time when the conflict between Russian and Ukraine was escalating dangerously, and protests in Venezuela were raging, Leto dedicated part of his speech “to all the dreamers out there around the world watching this tonight, in places like Ukraine and Venezuela.”

“As you struggle to make your dreams happen, to live the impossible, we’re thinking of you tonight,” said the actor in solidarity. However, that portion of Leto’s speech did not appear on television in Russia. Although Russia’s state-run Channel One denied that it was responsible for censoring his remarks, the actor’s message was nevertheless not delivered to those who may have needed to hear it most. 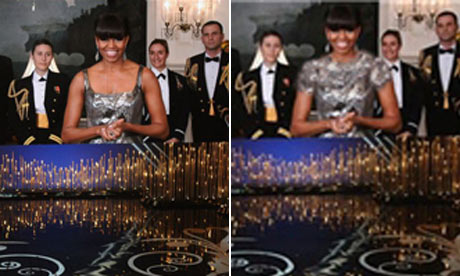 At the 2013 Oscars, Michelle Obama announced via satellite video that Argo had won Best Picture, but it seemed that her dress was too inappropriate for the Iranian media. Fars, a semi-official Iranian news agency, photoshopped pictures of the First Lady so that her dress no longer bared her chest and shoulders. According to the Islamic Republic’s media laws, Iranian women shown on television should be wearing a hijab that covers their hair, arms and legs, but the rules are somewhat more lenient towards foreign women. This time, however, the state’s TV censors went so far as to edit the recording of the broadcast frame by frame in order to cover up the First Lady. Fars was reportedly incensed by the Academy’s decision to honor Argo, which it has described as “anti-Iranian” and “Zionist.”

At the 81st Academy Awards in 2009, Sean Penn began his acceptance speech for the Best Actor Oscar with “you commie, homo-loving sons of guns.” Winning for his portrayal of Harvey Milk, the United States’ first openly gay elected public official, Penn used his time on stage to advocate passionately for equal marriage rights in California. “For those who saw the signs of hatred as our cars drove in tonight,” said Penn referring to the anti-gay protests outside, “I think it’s a good time for those who voted for the ban against gay marriage to sit and reflect on their great shame and their shame in their grandchildren’s eyes if they continue that way of support.”

Unfortunately, for viewers in mainland China, where the Oscars are broadcast with Chinese subtitles by the state-run China Central Television (CCTV), Penn’s speech said nothing of the sort. Censors mistranslated any language dealing with homosexuality: in the place of his opening line was the subtitle, “You really are so generous,” and in the place of his position on Prop. 8, “Everyone has equal rights,” without any indication of those who do not. Meanwhile, the Hong Kong-based STAR network that reaches 300 million viewers in 53 countries simply muted mentions of “gay” or “lesbian” during its tape-delayed re-broadcast.

The Chinese authorities dealt with Dustin Lance Black, the screenwriter of Milk, with even more blatant censorship: CCTV eliminated his acceptance speech altogether. “If Harvey had not been taken from us 30 years ago,” he said, “I think he’d want me to say to all of the gay and lesbian kids out there tonight who have been told that they are less than by their churches or by the government or by their families that you are beautiful, wonderful creatures of value.” Black’s moving speech was heavily censored for viewers in many areas of Asia, including Hong Kong, Singapore, Malaysia, India, Taiwan and Thailand, and completely omitted in mainland China.

A similar intervention occurred in 2006 when CCTV censored Ang Lee’s speech for winning Best Director for Brokeback Mountain and eliminated various clips from the film. Although these instances demonstrate the extent to which many Asian broadcasters are intolerant of gay rights speech, the Oscars, if given a voice in these countries, is a powerful agent of change and social reform.

In many cases, broadcast of the Oscars runs into barriers with state-run media stations outside of the United States, but there are domestic cases of political suppression and self-censorship as well. As far back as 1972, at the 44th Academy Awards, anti-war activist Jane Fonda won Best Actress for her performance in Klute, but gave a very short speech, saying only, “There’s a great deal to say and I’m not going to say it tonight.” She had been politically active in protesting the Vietnam War at various universities and rallies, even forming her own “Free the Army” tour during which she visited many military towns along the West Coast. Her adversarial stance on government during wartime had evoked outrage from many Americans and caused her to self-censor her speech at the Oscars. Although Fonda could not say what she wanted at the awards ceremony, four months later, she visited Hanoi to witness firsthand the bombing damage of villages and to denounce U.S. military policy in Vietnam. That visit spoke for itself.

At the very next Academy Awards, Marlon Brando boycotted the ceremony and respectfully declined his Best Actor Oscar for The Godfather. In his stead was Sacheen Littlefeather, the president of the National Native American Affirmative Image Committee, who conveyed that Brando was protesting “the treatment of American Indians today by the film industry.” Her statement briefly mentioned the “recent happenings at Wounded Knee,” in which an American Indian demonstration in protest of the government’s failure to fulfill treaties turned violent and deadly for both sides. She carried with her a lengthy statement written by Brando, which she felt she could not share presently but was later published in the New York Times. Littlefeather refrained from conveying the entirety of her message, but she and Brando aptly used the platform of the Oscars to raise awareness about Native American rights at a politically crucial moment in time.

The same year that Vanessa Redgrave won Best Supporting Actress for the World War II film Julia, she also funded and narrated a documentary film called The Palestinian in support of the Palestinian Liberation Organisation. As it is today, this was a highly politicized issue back in 1978, and her appearance at the Oscars was protested by members of the Jewish Defense League who picketed outside Dorothy Chandler Pavilion. During her acceptance speech, she commended those who have “refused to be intimidated by the threats of a small bunch of Zionist hoodlums,” drawing immediate boos from the crowd. Unfazed, she continued her speech and ended with a pledge to fight anti-Semitism and fascism. Later in the show, screenwriter Paddy Chayefsky admonished Redgrave for “exploiting the Academy Awards for the propagation of their own personal political propaganda,” as did many viewers at home.

Finally, arguably the most controversial Oscar acceptance speech in recent memory was that of outspoken filmmaker Michael Moore at the 75th Academy Awards. After winning Best Documentary Feature, Moore launched right into a denunciation of president’s military actions: “We are against the war, Mr. Bush. Shame on you, Mr. Bush, shame on you.” Moore’s opposition to the Iraq War, begun just four days prior to the ceremony, was met variously with boos and cheers from audience members until he was interrupted by the music and ushered off the stage.

The pro-war, anti-terrorism hysteria of the post-9/11 years made it very difficult for Michael Moore to express his opinions at the Oscars and afterwards. Moore continued to be heckled, stalked and threatened for what he said and he claims Homeland Security scratched up his Oscar trophy at the airport on his way home.

It’s now been over a decade since Michael Moore’s delivered his gutsy speech on a hot-button issue in front of millions of viewers. But it’s also a reminder that the Oscars can also serve as a popular platform for international solidarity, open discussion, and change brought by the free expression of film and speech.