Newly released documents show that the 2013 decision by Chicago Public Schools to remove a popular graphic novel from the district’s schools was just as dubious and censorious as it first appeared.

Nearly two years ago, NCAC’s Kids Right to Read Project (KRRP) fought tirelessly against the removal of Marjane Satrapi’s Persepolis, a humane, detailed account of growing up in the midst of the 1979 Iranian Revolution.

The story broke in March 2013, when schools began receiving instructions to remove Persepolis from classrooms and libraries.

KRRP went into swift action. NCAC sent a letter on March 17 to Chicago Public Schools CEO Barbara Byrd-Bennett and members of the board, arguing that the removing the book based on objectionable content violated the First Amendment and basic educational principles. While the board was arguing that the rule applied only to seventh-grade students, NCAC argued even that decision was “extremely troubling.”

On March 19, NCAC filed a Freedom of Information request for documents relating to the Persepolis decision — how and when it was made, who made the call and the explanation for restricting access to the book. Nine days later, Chicago Public Schools responded by releasing a paltry five documents.

NCAC also received a letter from the school board on March 20, from Deputy General Counsel Lee Ann Lowder. The letter stressed that “no decision has been made to remove Persepolis from eighth to tenth grade classrooms,” but that the district was considering whether the book could be considered appropriate for those grades with the “appropriate teacher training.” The letter also argued that the decision was, in fact, perfectly legal and appropriate: “We believe administrators’ pedagogical concerns with the graphic images of torture and obscene language in the book to be legitimate.”

Those assurances would turn out to be highly misleading. The real “concerns,” as the recently released emails make abundantly clear, were not about pedagogical matters at all, but rather the speed with which administrators could remove the book from the city’s schools.

We know this thanks to Jarett Dapier, a graduate student of library sciences at the University of Illinois Urbana-Champaign. At the end of 2014, Dapier filed another FOIA request to CPS for a report he was writing. The results that his FOIA yielded were comprehensive, to say the least. The 42 pages of email correspondence reveal a top-down directive from senior members of administration and curriculum directors to remove the book, based on a mere two pages deemed objectionable by one official.

The trouble began when elementary schools’ Network Chief Chandra James sent a frantic email to the Chief Officer of Teaching and Learning with images of the two offending pages, saying that they were “not appropriate at all. Please let me know if I can pull the book from my schools.” The response from curricula chief Annette Gurley: “By all means, pull them.” Gurley then sent a directive to aides to collect all copies of the book from libraries and classrooms across the district.

What followed was a fascinating paper trail of reactionary, alarmist-sounding school officials — including the CEO, Barbara Byrd-Bennett — trying to figure out who to blame for putting the book in schools in the first place. Buzzwords like “graphic language,” “content that is inappropriate for children,” and “sexually explicit language” popped up. There was talk of a possible permission slip for books like Persepolis in AP classrooms. One administrator even suggested doing a “second sweep” of all previously recommended books, mentioning Brian Moore’s Black Robe as a particular book in need of review. 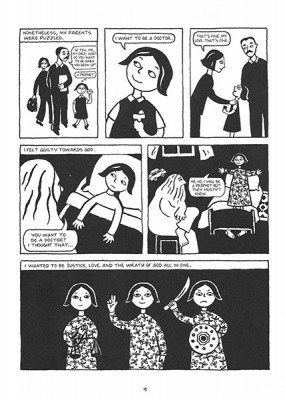 But administrators started getting pushback almost immediately. Librarians pointed out that the district’s collection development policies barred them from removing books in such a swift, premature manner; it turns out that the process for banning books from school libraries requires more than a single panicky e-mail. AP teachers also protested the book’s removal due to its vital place in curricula. At this point, school officials backed off somewhat, granting that AP classes would be the only exception to the school-wide removal.

Most alarmingly, the emails don’t point to any of the school officials consulting critical or educational rationales for teaching the book in classrooms, which you imagine would be their primary concern. In fact, it’s unclear whether any of the school administrators had even read Persepolis in its entirety. Unfortunately, that isn’t surprising — it’s become depressingly common for censors to pick-and-choose objectionable content within literature and let those few, decontextualized pages speak for the work as a whole.

Rather than upholding the principles enshrined in their own policies, CPS officers wanted to play the censorship game quick-and-dirty. The bureaucratic mess, and the subsequent cover-up, reveals the danger of circumventing sound school policies when dealing with challenges to books. Even the existence of such policies wasn’t enough to stop CPS officials from yanking books based on their own whims.

Unfortunately, your letter does not fully address our two main areas of concern: first, the extent of the District’s authority to remove a book based on objections to its content; and second, the absence of established procedures for making past and future decisions about the status of this and other books.

The school district still hadn’t offered a satisfactory explanation for how “a book that is recommended reading one week be considered ‘inappropriate’ the next.” Absent any reasonable explanation, NCAC observed:

CPS’s actions with regard to Persepolis strongly suggest that there is no pedagogical rationale for the removal of the book, but rather that the explanation offered now is a post-hoc rationalization for a poorly conceived and executed decision.

The recently released documents demonstrate this was precisely what happened.