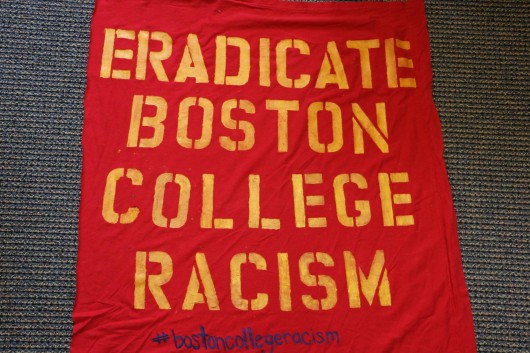 Remember a few months ago when everyone was debating college activists' lack of commitment to free speech? According to one narrative, the problem was that "coddled" students were motivated at least in part by the fact that they could be forced to hear ideas they found disagreeable or uncomfortable. The activists wanted to speak, but they did not want to listen or debate.

Now there's no doubt that this has been true in some cases. But what about when the real threat to free speech isn't campus activists but administrators? Take what is happening at Boston College.  A student activist group calling itself Eradicate Boston College Racism was formed in response to the deaths of Eric Garner and Michael Brown. As it explains, "Week after week, violent images of a disregard for Black bodies pervaded the media, yet leadership at a university with a public mission to be 'one for others' was silent."

In December 2014, the group staged a 'die-in' on campus. The protest was not sanctioned or affiliated with a registered student group, which is required by the university. As the school newspaper The Heights reported:

The die-in was originally supposed to be an organized event hosted by the Black Student Forum, but due to University restrictions, the organization was not able to get a permit for their event and subsequently canceled it.

The group argues that Boston College is sending students some plainly contradictory messages. The school's February 2015 letter encouraged students to "continue the work of the marchers in Selma here at Boston College," and to "contribute to the eradication of injustice and racism." But the school's restrictive speech policies make that difficult.

Those policies have been criticized by the Foundation for Individual Rights in Education (FIRE), which says Boston College  "misleads students who count on its promises of fundamental intellectual rights, restricting speech that would be protected on a public campus." 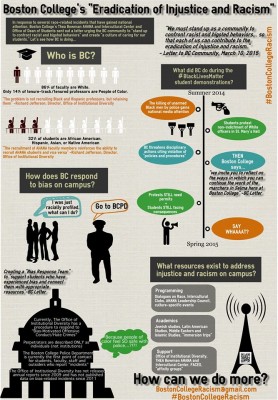 The school requires students who wish to protest to register in advance ("applications for permits for all activities in the nature of a public speech, rally, demonstration, march, or protest must be submitted a minimum of 48 hours in advance to the Dean of Students"), and they must get permission to post informational flyers ("Postings must be consistent with the principles and values espoused by Boston College…. We reserve the right to make decisions regarding the approval of what is to be posted.").

Student activists have run into problems on both fronts. School officials reportedly would not allow the group to distribute posters critical of the school. And some Boston College administrators seemed especially flummoxed by the group's unwillingness to comply with university rules. As dean of students Thomas Mogan put it, "I let them know that they have the right to express themselves, but demonstrations, as per University policy, need to be registered and approved… and that I expected them to register any future demonstrations or protests." Some members of the group say that faculty members have even been discouraged from publicly supporting their cause.

And then in early December, the group staged a protest where they sang Christmas carols outside a Board of Trustees meeting, with lyrics modified to address racism and discrimination. That action led to five students being "cited for disruption and unregistered protesting," as the school newspaper reported, which also added that "if the students are found in violation of these rules again, they could face larger consequences."

Of course, one could correctly point out that the school is merely enforcing its stated rules regarding campus speech, so it's no surprise that students who attempt to speak up without permission are going to find themselves in the dean's office. But maybe those restrictions are precisely the problem.

Some of the activists have expressed optimism that the school might relax some of these restrictions. And, for what it's worth, it wasn't always this way; as a columnist at the school newspaper noted, "The constraints and requirements for a student protest were minimal in 1970 compared to those imposed on students’ freedom of speech today."