Are Millennials Iffy on Free Speech?

Previous Next
Are Millennials Iffy on Free Speech? 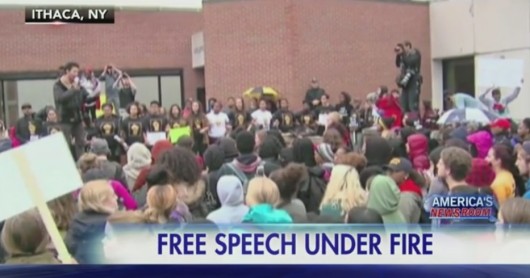 For many, the big free speech story of 2015 was that college students didn't seem to have much interest in free speech. Two surveys served to bolster a sense of alarm about the level of public support for restricting speech rights. While such views are indeed troubling, there's no reason to believe they represent a turn away from the First Amendment—or any change at all.

A Huffington Post/YouGov poll this week found that "a majority of people—53 percent—said that colleges should sanction students who make racially offensive statements." The survey also asked respondents what should be a higher priority: Giving college students an "absolute right to free speech," or providing "an environment free from discrimination, even if that means placing some limits on what students can say." The latter garnered slightly more support, 43 percent to 38 percent.

It's always dangerous to read too much into a single opinion survey, but these findings would seem to be in sync with a Pew survey that was released late last year. That poll garnered heavy media attention for its finding that 40 percent of millennials support government action to prevent individuals from saying things that would be offensive to minority groups. In the midst of a wave of campus protests over racism, offensive Halloween costumes and the like, those numbers were treated as a type of confirmation: Young people these days aren't so hot on free speech.

It's an obvious conclusion. But have things really changed?

The only way to know for sure would be to compare these findings to polling from an era when the public presumably held free speech rights in higher regard. But it's not clear that such a 'golden age' exists. After the Pew survey came out, Jesse Singal of New York magazine noted that the finding was in line with older surveys. As he wrote,

there’s a general pattern to how Americans answer these questions: They’ve shown over and over again that they favor free speech in theory, when asked about it in the broadest terms, but they also tend to be fairly enthusiastic about government bans on forms of speech they find particularly offensive (what’s considered offensive, of course, changes with the times).

So in the 1930s and 1950s, as Singal writes, surveys revealed that Americans weren't enthusiastic about granting speech rights to atheists, communists or radicals. In a 1990 poll, with the 'culture wars' in full swing, 59 percent supported the proposition that the government should have some censorship authority, especially with regard to banning the sale of certain types of music.

And for the past several decades, surveys have shown that many people have similar reservations about offensive speech. In his book Speak No Evil, Jon B Gould recalls that surveys of incoming college students starting in the early 1990s show a majority favoring "hate speech" regulations.

Those feelings are not limited to those on campus. A CBS/New York Times poll found 60 percent support for colleges punishing students who use "derogatory language" targeting minorities, women and other groups.  In 1999, when a Roper poll asked whether people should have the right to say things that "might be offensive to racial groups," 75 percent of young people disagreed.  A Freedom Forum poll on the same question that year produced a similar response.

So what does this mean for free speech advocates? For starters, take a deep breath. What many see as a new wave of illiberal attitudes towards free speech might not be so new at all. That might be of little comfort, and it still leaves us  with a considerable challenge. If the ultimate goal is to encourage a deeper appreciation for First Amendment rights, insisting that young people are whiny, coddled narcissists probably isn't a winning strategy.

A more sensible approach would be to remind everyone—the young and the not-so-young—that expressing ideas that some consider repellent is part of the give and take of a free society. Indeed, the right to express unpopular beliefs is the only reason that many social movements—from feminism to LGBT rights to union organizing to civil rights—have won important victories. And if history is any guide, putting government entities in charge of determining which ideas are acceptable inevitably results in policies that target unpopular or dissident speech.

Beyond that, there is obvious value in allowing citizens the right to express themselves. We learn more about ourselves and our fellow citizens by speaking, and listening.

Or, to put it more succinctly: Free speech works.