Previous Next
15 Threats to Free Speech in 2015

Last month we brought you 15 inspiring stories about individuals and groups opening up dialogue, resisting censorship and speaking out to defend free expression.

And now… the flip side. This list does not represent the most dire threats to free speech and expression, but the range of such threats–from giant internet companies to local school boards– and how those wielding power are successful in their attempts to harass, cajole or shut down speech they find disagreeable.

The conservative religious group didn't like the idea that a school in Wisconsin had scheduled a reading of the book I Am Jazz, which tells the story of a transgender youth. So they sent a letter to the school threatening to sue them for violating the religious freedom of parents who object to the lesson.

This year we saw several institutions respond to criticism of art by removing the art in question. The Boston Museum of Fine Arts was accused of "yellowface" cultural appropriation over an interactive presentation that allowed visitors to wear a kimono. After initially defending their approach, the museum suspended the feature. In March a similar protest over a student protest at Santa Barbara City College led the students to take it down early—a decision no doubt influenced by the school's failure to offer any support for artistic expression. And in two high schools—Oxon Hill in Maryland and New Jersey's Clearview Regional High School—administrators reacted to criticism of student artwork addressing racism and police brutality by removing the art from display. It's not just schools; a Washington state government building in celebrated American Indian Heritage Month with an art display featuring works by imprisoned activist Leonard Peltier. But when a group of retired FBI officials complained, the agency removed the paintings.

One way to keep a lid on free speech is to tell citizens that they have First Amendment rights—sort of. A student at California State Polytechnic University, Pomona was prevented by campus police from handing out animal rights flyers because he hadn't obtained the appropriate "badge" to participate in the school's free speech zone. He filed suit with the help of FIRE (The Foundation for Individual Rights in Education), and in July the school settled. Similar examples, on campus and off, demonstrate that this remains a contested free speech issue.

Can a high school student be punished for tweeting something someone might find insensitive? Apparently so. As part of a homework assignment to watch the Republican presidential debates, Revere High School student Caley Godino tweeted something that she thought sounded like candidate Donald Trump. Responding to a teacher's tweet about low voter turnout, she wrote that "only 10 percent of Revere votes for mayor cause the other 90 percent isn't legal." Revere superintendent Dianne Kelley insisted to a local TV newscast that the Massachusetts district supports free speech, but they have a funny way of showing it: Godino was removed from the cheerleading team for the rest of the year. 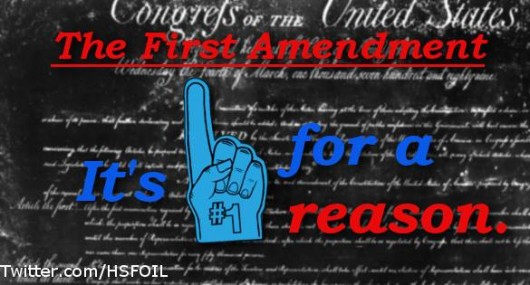 High school officials in Hanover County, Virginia, resisted demands to remove a documentary film from the curriculum. But then the board turned around and came up with a policy on teaching 'sensitive' topics that will only make things worse, requiring teachers to get pre-clearance for "material that raises a reasonable concern relating to its appropriateness." Student activists say the policy changes have emboldened one local political official, who they say is behind a campaign of pressure and intimidation that is affecting classroom instruction.

US Department of Defense

Activists and journalists have fought for years to find out what it is happening at the Guantanamo Bay prison camp. Apparently the US military will be making it harder for reporters to do their job. Explaining that he needed "to tighten things up a little bit," Gen. John F. Kelly plans to limit reporters to just four "media day" visits. The New York Times reports that journalists "will generally no longer be permitted to go inside the prison camp’s walls," and that Kelly "no longer wanted reporters to talk to lower-level guards."

While the social media giant is still probably the most important internet speech platform around, that doesn't mean it's open to all forms of speech–especially anything that involves the human body. Early this year, Facebook banned a trailer for the book After Abel and Other Stories, apparently because it included nude art– which would seem to be allowed under Facebook's "community standards." Artist Grace Graupe-Pillard took a different approach, posting nude photographs that were likely to raise some problems. And they did; she had to remove a series of images if she wanted to re-activate her account. What she wanted from Facebook was some means of responding to the anonymous complaints that shut down her account. But another artist, Tina Garrett, seemed to be following the rules when she posted images of semi-nude paintings, which Facebook's policies theoretically allow. Her account was suspended after some other users complained. The social media company admits that "our policies can sometimes be more blunt than we would like." Maybe it's time to fix them.

Climate change denying politicians are free to hold such views. But what about when they use their power to harass the scientists whose work they don't like? That's what Rep. Lamar Smith (R-Tx.) has been doing this year. As chair of the House Committee on Science, Space and Technology, Smith has been focusing his attention on the NOAA researchers who challenge claims about a global warming "pause." He's demanding documents, emails and threatening prosecution if he doesn't get his way. Critics point out that much of what Smith says he wants is publicly available already–which makes this less about scientific integrity and more about intimidation.

Student composer Jonas Tarm's Carnegie Hall debut was canceled in March after the New York Youth Symphony decided that Tarm's work was "unacceptable." Tarm, who was one of the winners of the symphony's prestigious First Music competition, briefly quoted from famous Nazi and Soviet anthems in his original piece, "Marsh u Nebuttya," which he says was intended as a commentary about war and militarism. The case drew international criticism and press attention, but the symphony remained committed to its suppression of his work.

Victor De La Rosa won a competition calling on local artists to design work that could be displayed at a San Francisco train station, and on some city buses. But his art was never officially shown; it seems that Bay Area Rapid Transit officials didn't like one of the posters in his series about local gentrification. While the use of the term "bitch" may have crossed a line for some, that wasn't the real issue; BART rejected a sanitized version of the piece too. It seems that they felt the "demeaning tone" was inappropriate.

Schools across the country were marking Martin Luther King, Jr. Day by encouraging students to attend free screenings of Ava DuVernay's acclaimed film Selma. But the superintendent of Alabama’s DeKalb County Schools, Hugh Taylor, forbade Collinsville High School’s history club from watching the film on a field trip because he objected to the profanity and racial slurs in the movie. Taylor defended the decision by arguing that it is a "multicultural school"–which apparently means denying students a unique educational opportunity.

In March, the Missouri History Museum abruptly canceled a student-led discussion program focused on protest movements in Ferguson, Mexico and Palestine. It was the latter category that appeared to trouble museum officials, who claimed that the inclusion of Palestinian perspectives was not part of the original arrangement. Student organizers countered by saying that it had all been agreed on in weeks in advance, as posters announcing the event at the museum would indicate. The discussion never happened; instead, students held a protest to draw attention to the museum's cancelation.

There's been a wave of parental and community outrage over alleged Islamic 'indoctrination' going on in public schools. The complaints range from world history textbooks to children's book that some think paint a rosy picture of the faith. The movement is especially intense in Tennessee, and State Representative Sheila Butt wants to help by introducing a bill that would prohibit the teaching of any "religious doctrine" until the 10th grade.

Responding to a storm of conservative complaints about the supposedly 'anti-American' bias in the Advancement Placement History curriculum framework, lawmakers in several states brought forward bills that sought to ban the AP courses, or demanded that the College Board go back to an older framework. The pressure led the College Board to make some changes; we'll see if that's enough to satisfy the politicians who raised the fuss.