A painting, included in a juried exhibition show at the Mansfield Art Center in Ohio, was partially covered with black paper. The painting had been selected for inclusion in the show, but the management of the Art Center decided that the outside edges of the work, which were covered with clippings from pornographic magazines, should not be seen by anyone. Sans edges the work was a simple urban landscape. According to the artist, Neil Yoder, “The peripheral edge emerged from the idea ‘supple, viscous soft blue’ contrasting with the earth tones of post industrial dreamscapes….The contrast of differing beauty forms or subconscious shapes, tinged with revulsion, ecstasy, perceived ‘filth,’ aesthetic fascination, birth and death.” 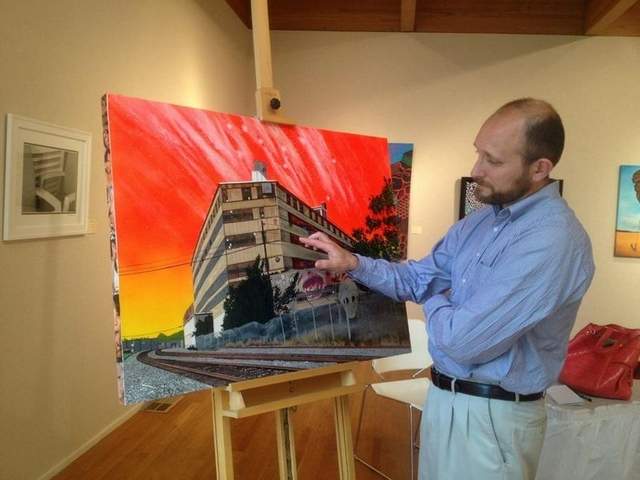 So, with the edges covered, the work was rather dramatically reduced in meaning: the interplay between  industrial landscape and sex imagery  being, arguably, at its core. For an Arts Center to tamper so heavy-handedly with the integrity of an artwork is very disturbing. According to the Center’s director, Tracy Graziani, “We normally don’t like to censor art, but this is pornography and there are laws about how to handle pornography and would we be liable if a child viewed it?”

We are pleased that the Arts Center “normally” doesn’t “like to censor,” but not too hopeful when its director exhibits a rather vague understanding of what the law allows. In fact, the law regulates obscenity, not pornography. Pornography has no legal definition whatsoever, while obscenity is defined, in part, as material without serious artistic value. Clearly such is not the case with a work that was selected by a jury for an arts exhibition.

Explicit sex in art is by far not limited to the present: Back to the 19th century, Gustave Courbet’s Origin of the World is both a crotch shot and a work exhibited in major museums around the world (including the Metropolitan). Farther back in history, we can look at Japanese shunga (very explicit pornographic woodcuts) or the Tantric imagery of Khajuraho temples.

The images mentioned above have been seen by many children and no disaster has ensued. They are all much more in-your-face than the rather discreet edges of Yoder’s painting. But the crucial issue here is that concerns about children (whether real or imaginary) cannot be allowed to reduce all the Art Center’s exhibitions to content suitable for six-year olds. Adults have rights too (remember free speech, the first amendment?) – and when these adults bring their children to a museum or art gallery, they know that it is not a children’s playground. If the Art Center is worried about the reaction of these parents, they can provide informational materials and make it the parents’ choice whether to bring their children or not rather than “dressing” an art work and making it inaccessible to all.