A student’s sculpture project at South Kingstown High School was mutilated by her art teacher even before it was completed. The reason was that the anatomically correct figure sported a penis. Apparently penises could be viewed by students when they are studying art, but not reproduced in their own art work. While requiring student sculpture to be true to the human form, the school apparently finds some parts of that human form undesirable and better left out. The sculpture showed a man in a crawling pose, completely naked. Instead of a head, however, the sculptured featured a television on top of the man’s neck. The student found out what had happened to her sculpture when she returned from a week-long leave of absence and discivered her project “on its side. One finger had been broken off, the head had fallen off, and the penis had been torn off.”

While we recognize that school administrators have the authority to limit student expression when it could lead to a disruption of the educational process, it is well established that students do not “shed their constitutional rights to freedom of speech or expression at the schoolhouse gate.”  Tinker v. Des Moines Independent Community School Dist., 393 U.S. 503, 506 (1969). While a few freshmen snickers could greet the work initially, that could be no more a reason to destroy a student’s artwork than to remove Michaelangelo’s Sistine Chapel ceiling from the humanities curriculum.

The action of the teacher, which is supported by the school administration, is not only constitutionally suspect, but also educationally unsound.  In the 20th century, art historian Kenneth Clark has noted, the nude “remains our chief link with the classic disciplines.”  The beauty of the human body has inspired painters, photographers, sculptors, and choreographers for many centuries.

Not only have nudes been a central subject of art from ancient times, but figure drawing and sculpting is a staple of art education.  Trying to teach art while excluding the human body is hardly possible. The only thing a ban on modeling nudes would protect students from is a good arts education. And putting a chill on the expression of budding artists goes against the principles of an education whose goal is to produce the responsible, free and creative citizens of a democratic society. 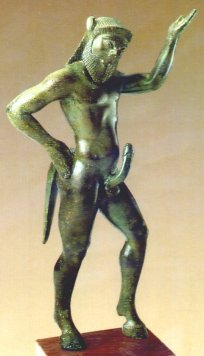