Earlier today, Yelp users were protesting the lawsuit by posting a rash of negative comments about Biegel on Yelp. 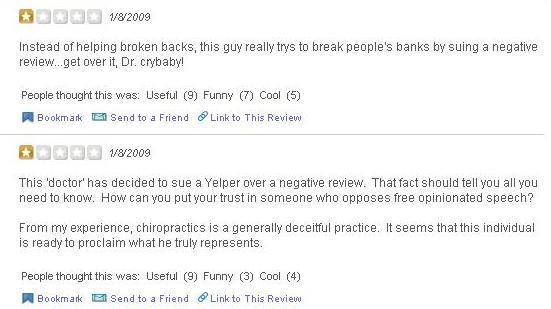 Since then, these negative comments have been removed, presumably by Yelp, which, according to its terms of service, “reserves the right (but has no obligation) to remove or suppress User Content from the Site at its sole discretion for any or no reason and without notice or liability of any kind.”

According to an article in The San Francisco Chronicle, a San Franciscan chiropractor is suing a former patient, Christopher Norberg, over negative reviews published on Yelp:

Christopher Norberg, 26, of San Francisco posted the first review in November 2007 after visiting Steven Biegel at the Advanced Chiropractic Center on Valencia Street. In the six-paragraph write-up, Norberg criticized Biegel’s billing practices and said the chiropractor was being dishonest with insurance companies.

When the chiropractor complained about the review, Norberg replaced it with a new entry a few weeks later that read in part, “I think that he is trying to scare me into removing a negative post (that might explain why he has only positive ones). I believe that he has been harassing me into shutting up, and I feel as a consumer I have a voice and that I can use it on forums made for sharing it, especially when I feel that the experience was unsatisfactory.”

Biegel said both reviews were malicious and in February sued Norberg for libel and invasion of privacy. If the case isn’t settled, it will go to trial in March in San Francisco Superior Court.

This case—one of the first in which a business has sued a Yelp client over a negative review—brings up the question of whether negative, off-the-cuff reviews published on sites such as Yelp can be grounds for libel cases. If so, will this have a chilling effect on reviewers?

Interestingly, it seems that Biegel’s lawsuit has hurt Beigel’s business more than helping it, resulting in negative reviews from angry yelp users and a decrease in referrals.

“When people try to pull down unflattering material, it has the absolute opposite effect” of what they intend, he said. “It’s very difficult to silence speakers on the Internet – it’s a culture of people who don’t like those kinds of attempts.”

In other words, even in the face of lawsuits, Yelp users are not easily chilled.