Previous Next
Bikini apps for iPhone are “overtly sexual” 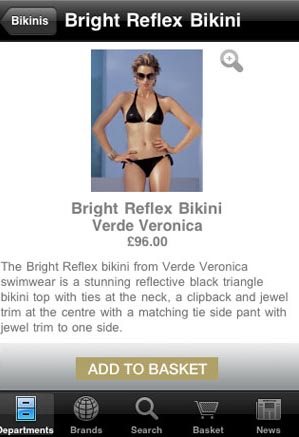 We can now add swimwear catalogs to the list of controversial iPhone apps, which already includes a Kama Sutra ebook, NIN, and the dictionary.

In an effort to keep out anything “overtly sexual” from iPhone apps, Apple removed Simply Beach’s catalog (Simply Beach is an online beachwear retailer). Apparently, women in bikinis press Apple’s red-alert sexuality button (or do they?*).

This has put people’s jobs at risk as we rely on all income streams … It would have been better to have had some warning or discussion before removing the app. I assume all clothing retailers that sell anything other than overcoats will now have to be removed from iTunes?

As of yesterday the app has been restored. But the issue remains: whether or not Apple, or Internet intermediaries are “fast becoming the new arbiters of morality – and setting the tone of what is acceptable and what is not,”  as NCAC’s director of programs, Svetlana Mintcheva, argues. “There is no First Amendment to protect our speech in such communities,” she says regarding a recent controversy over YouTube’s pulling videos from an internationally acclaimed video-artist, “but that is why it is much more important to get involved and express our outrage.”