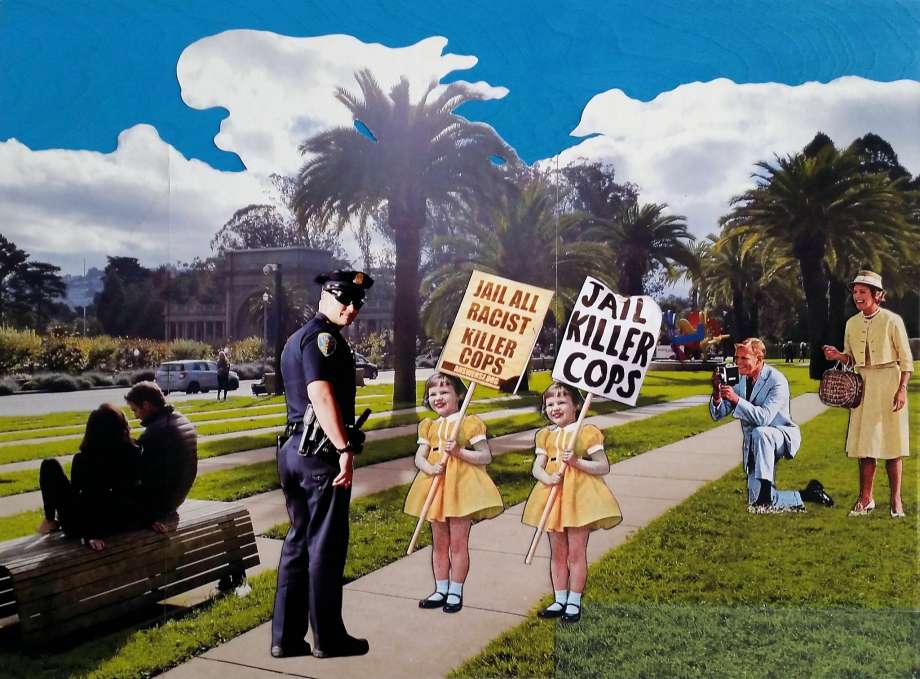 "Proverbs 22 v.6." by San Francisco artist Mark Harris; from an exhibition at the East Side Union School District celebrating Black History Month, removed by the school district's superintendent due to 'complaints.' (© Mark Harris)

UPDATE 2/10/2017: NCAC has sent a joint letter with the American Civil Liberties Union (ACLU) of North California urging the East Side Union School District to restore the exhibit celebrating Black History Month that came under fire for its alleged political bias, and also put policies in place to prevent future viewpoint discrimination of artwork.

The joint letter to the superintendent underlines that claims of offense is an unacceptable justification for the removal of artwork, and that the decision to remove Harris’ works sets a dangerous precedent that future displays will be subjected to a “hecklers veto.” It goes on to argue that the removal amount to an unconstitutional act of viewpoint discrimination.

An exhibition of artworks celebrating Black History Month was removed from display in a San Jose School district building after complaints calling the works offensive.

The East Side Union High School District’s African American Student Advocates (AASA) independently organizes the annual display in celebration of Black History Month. This year, the Reverend Jeff Moore, one of AASA's co-founders and president of the San Jose/Silicon Valley Branch of the NAACP, invited San Francisco artist and educator Mark Harris to exhibit his work in the lobby of a District office building. Harris presented eleven paintings that depict the African American experience and the history of racial injustice.

Harris described the works he selected as "thought provoking": the paintings tackle a number of topical issues, including police brutality and the history of slavery and racism.

The works were on view for only a few hours before District Superintendent Chris Funk had them removed in reponse to complaints that the work was offensive. Apparently Mr. Funk considered Harris' exploration of the painful history of African Americans in the US too political for the district: “[W]e’re not here to advocate one position or another as a public institution,” Funk stated about his decision to remove Harris’ works.

NCAC has sent a letter to the superintendent opposing the decision to remove the artwork, urging him to restore the exhibition. The letter points out that claims of offense are not an adequate justification for censoring artwork, and that in this era of intense political polarization, many artworks may be offensive to someone.

The letter also argues that the mere act of displaying artwork is not an endorsement of its message or of the vision, ideas, and opinions of the artist. Countless universities, libraries, arts councils, schools and administrative buildings across the country display artworks that express political viewpoints, and in doing so they do not endorse the artwork’s message but rather showcase a diverse range of perspectives.

In removing the display, the District lost an opportunity to spark dialogue about race relations—a subject that is of special relevance today. Censorship of the exhibition sends the troubling message that the history of racism is a topic off limits during Black History Month.

In an attempt to mitigate the act of censorship, the District has invited Harris to give a lecture about his work, which will be held Wednesday, February 15th from 6:30 – 8:30pm, in the Board Room of the East Side Union High School District, 830 N. Capitol Avenue, San Jose. But while artist lectures are a welcome part of exhibition programming, a lecture is no substitute for the experience of directly engaging works of art.

NCAC’s Arts Advocacy Program strongly urges the District to restore Mark Harris’ paintings to public display in celebration of Black History Month before it is too late to do so, and to develop practical procedures for responding to outside pressures when dealing with controversial artworks in the future.