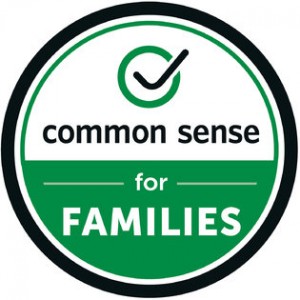 Common Sense Media’s new seal of approval, which film studios may use in advertising

When books are challenged in schools and libraries, it’s not uncommon for complainants to invoke content ratings for other media, as in “if this were a movie, it would be rated R.” From there, some parents take what seems to be the logical next step: advocating for comprehensive content ratings for books, as we saw just this week in a Dallas-area school district. But a recent article by iO9’s Lauren Davis demonstrates once again why book ratings are not such a good idea and would inevitably lead to censorship.

Davis focuses on Common Sense Media, the independent non-profit which rates all sorts of media from books to movies to music on an age-appropriateness scale from 2 to 17. Although CSM’s ratings are not displayed on products, as MPAA and ESRB ratings are on movies and video games, they and other independent ratings systems applied to books are sometimes cited by parents who want a certain book removed from a classroom or library.

But CSM itself does not intend for its ratings to be hard and fast blanket rules for all children, as evidenced by the fact the each rating also covers a slightly younger age range in which “some content may not be right for some kids” — with the implication that some other kids will handle it just fine. The same could be (and often is) said for virtually every challenged book we cover here regularly; it’s an interesting exercise, for instance, to compare CSM’s official ratings for Sherman Alexie’s The Absolutely True Diary of a Part-Time Indian, emily m. danforth’s The Miseducation of Cameron Post, and John Green’s The Fault in Our Stars to the reviews and suggested ratings submitted by parents, children, and teens for the same books. So, while CSM obviously does not intend or expect for every rating to apply to every child at exactly the age stated, too many parents interpret them that way and then, Davis says, “use them as ammunition to interfere with the public education of other children.”

Moreover, CSM has just begun issuing a “seal of approval” for movies — a phrase that may have an ominous ring to those who know comics history. There are certainly important differences between the Comics Code Seal of Approval and CSM’s new stamp, but it is nevertheless an “all or nothing” proposition which lacks the granularity of even the group’s own standard ratings. Directors and studios already self-censor to some extent in order to attain a desired MPAA rating, and it’s not difficult to imagine that the CSM seal may soon become just another standard hurdle to be cleared in the film industry.

Most publishers would likely not be terribly receptive to having the seal apply to books as well, but CSM is an independent body. If it does eventually decide to issue the seal for books, its influence in that industry would likely be felt more on the consumer side than the producer side — that is, parents will use it to guide reading choices for their own children, but some may also cite the lack of a seal in support of book challenges in libraries and schools.

The National Coalition Against Censorship — an organization which counts CBLDF among its members and which which we frequently partner, including on the letter to the school board in Dallas — strongly opposes rating systems. From Davis:

NCAC is opposed to broad rating systems for all media, calling for more qualitative review systems. “What Common Sense Media and these other sites have done is flag these as problematic areas and therefore create the message that if you’re a good parent, you really shouldn’t let your kids see this stuff. It’s like a scarlet letter,” says [NCAC Executive Director Joan] Bertin.

For more on how ratings systems can affect public perceptions of books or other media and lead to censorship battles, check out the American Library Association’s FAQ on Labeling and Rating Systems and the National Coalition Against Censorship’s critique of CSM’s system.