Catherine Ross: “Freedom of Speech is the Engine Oil of Democracy”

Previous Next
Catherine Ross: “Freedom of Speech is the Engine Oil of Democracy”

Commenting in USA Today on the contemporary debates over trigger warnings and “coddled” college students, Catherine Ross suggested a possible explanation that has so far escaped scrutiny: “our public schools, where principals and school boards too often fail to teach and respect the speech rights of students that the Constitution protects.” When schools curb student speech, they undermine young people’s efforts to develop and practice the skills and dispositions of democratic citizenship. To this extent, public education is failing in its critical civic mission.

Ross develops this argument in her powerful and troubling new book, Lessons in Censorship: How Schools and Courts Subvert Students' First Amendment Rights, published by Harvard University Press in October 2015. Catherine Ross is a 2015-16 visiting scholar at the Harvard School of Education and a professor at George Washington University Law School where she specializes in First Amendment law, family law, and legal and policy issues concerning children. NCAC recently spoke with Professor Ross about the state of student speech in the United States.


How would you characterize the state of students' First Amendment freedoms today? What is most worrisome? 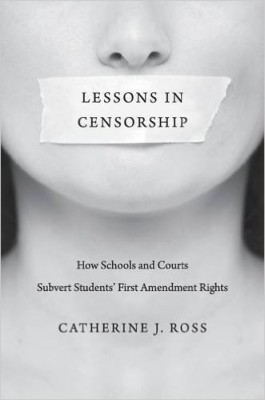 There are many reasons for concern about the state of students’ freedom of expression. Schools too often censor student speech that the Constitution fully protects even in elementary, middle and high school. They silence and punish students who express their own opinions on important issues, including national and local politics, the rights of LGBT persons, guns, abortion, and more. Students are especially likely to get in trouble for speaking up if someone else's parent finds their speech controversial or "offensive," meaning the adult disagrees with it. But controversial and disagreeable speech is exactly what the Speech Clause is designed to protect.

The heart of the problem is that too many principals and school board members don't know or understand the limits the Constitution places on their ability to control what students say, while others simply disregard the law. Shutting down student expression has what lawyers call a “chilling” effect on the exchange of ideas moving forward – that is, other speakers remain silent out of fear that they will get in trouble if they express their views. Schools should be places where the robust exchange of ideas flourishes, not citadels of conformity and what Justice Brennan called impermissible "thought control."

How would you respond to those who worry that recognizing student speech rights undermines discipline?

People who belittle the importance of student rights are inclined to stir up fears of disorder, disobedience and chaos – but I think they are wrong for several reasons. First, schools are always able to silence and punish speech that could lead to violence. Second, the special legal doctrine that applies to speech in public schools allows officials to control speech that can reasonably be anticipated to lead to material disruption that would interfere with the school’s ability to educate students. And third, recent studies in the area of school discipline and effective learning show that students do best in an atmosphere in which teachers and administrators treat them respectfully, not punitively.


One phenomenon we have been following is school monitoring and disciplining of social media speech. How serious is this problem? Where does it stand legally?

The problem of schools reaching out to punish what students say on social media is increasingly significant—and quite frightening. Schools have punished students for satires about school personnel and other speech that officials found rude or offensive—posted in the students’ free time, from their family homes, and on their own computers. Some punishments for off-campus, online expression have been draconian: students have been expelled and even sent to institutions for delinquents based on speech that does not violate any laws and that courts later ruled the Constitution protected.

The Supreme Court has not yet decided whether schools have any right to punish speech on social media posted outside of school hours. But most of the appeals courts that have looked at this question have concluded that there must at least be a close connection between the online speech and the risk of serious disorder at school before school authorities can punish the speech. Some appellate judges have voiced the opinion that speech on social media developed outside of school is none of the school’s business. A young rapper has petitioned the Supreme Court to hear his appeal in a case involving these issues, and we will learn soon whether the Court will hear the case.* (Editor's note: On February 29, the court declined to hear the case)

Why should Americans care about how schools treat student speech?


In many communities across the country, the adults who would like to censor student expression are much louder and more influential that the adults who hope that schools will allow students to learn how to exercise their rights

Freedom of speech is the engine oil of democracy. Nearly 90% of young people in the United States attend public schools – the schools that are bound by the Constitution and that must honor freedom of speech. (Private schools are not the government, and can forge their own policies about how they treat student speech, privacy and other issues). Public schools that violate the speech rights of students harm the individual students whose rights are violated, and as the courts explain, the loss of speech rights can never be compensated. Violations of student speech rights also harm our whole society. Violating rights sends a message that the government doesn’t mean what it says about the importance of constitutional rights and liberty. It teaches students that rights are theoretical – not for them. And it misses an unmatched opportunity for our society to transmit the fundamental values of pluralist democratic practices to the next generation of citizens. Few things could be more important.

What could be done to improve the situation for student speech in schools?

Educators need help understanding what is a very complicated area of law – and I hope my book will help school officials better understand what the First Amendment requires. But there are many things parents and other citizens can do too.

In many communities across the country, the adults who would like to censor student expression are much louder and more influential that the adults who hope that schools will allow students to learn how to exercise their rights. Elected school board members at the local level have a lot of discretion in setting the tone of a school district’s culture. The school board can let principals know that it expects the school to respect student expression, or even to encourage it to flourish. And even where the law allows schools to restrict students speech (for example, in official school publications), schools do not have to assert all the powers the law gives them—they can, for instance, refrain from controlling the content of a student newspaper although the law permits them to censor it. I urge citizens to raise these issues about how a district will use its powers before the school district confronts a controversy over student expression – at that point, all the participants too frequently dig in their heels and refuse to reconsider. It’s much better to work toward a positive commitment to develop a school system in which students learn liberty by experiencing it—that is, a system expressly committed to respecting student rights.

States are always free to enact more stringent protections for civil liberties than the U.S. Constitution requires, and student speech provides a good example. After the Supreme Court ruled that schools could control the content of student publications, like newspapers, literary magazines, and more, some states passed laws that provide greater protection to student publications (and their advisors) than the federal law. Concerned citizens in states that don’t have such statutes might lobby for laws that hold school officials to a higher standard when they limit student expression than is in place under federal law. (The Student Press Law Center is working on this in many states). The difference in statutes– along with the different rulings by appellate courts on questions the Supreme Court has not answered – means that student speech rights may vary depending on where the student lives, and on the exact question. My book has a map that helps students and parents figure out which of the decisions I discuss apply where they live.