In Defense of Offense: Student Artwork in Kentucky

Previous Next
In Defense of Offense: Student Artwork in Kentucky 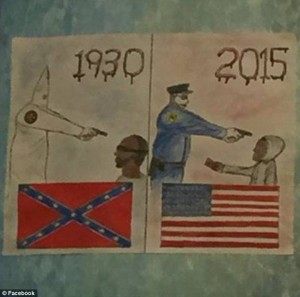 What happens when a cop complains that student artwork is “propaganda?” Absolutely nothing until the end of the unit, if you’re North Oldham High School. And for that, we commend them.

Kentucky police officer Dave Hamblin's Facebook post went viral last week after he complained about the student piece, which was on display in his daughter’s school. The work was part of an English class project inspired by the racial violence in Harper Lee’s To Kill a Mockingbird, and depicted a Ku Klux Klan member pointing a gun towards an African-American man under the heading “1930,” and a police officer pointing a gun at a hooded African-American boy under the heading “2015” – meant, the teacher said, to illustrated how “racial violence has evolved.”

Hamblin took offense, and called on the school to take it down, saying that "What this propaganda creates, are future cop haters."

If that type of complaint sounds familiar, that’s because it is. Last year we reported on similar incidents in New Jersey, Maryland, and Louisiana. In all those cases, the work was removed. In Oldham County, though, the district defended the art, leaving it to the teacher to decide what was best for her class.

District spokesperson Tracy Green said, “The drawing is a student’s artistic representation and based on the lens through which the student viewed that issue and the student has a first Amendment right to share that opinion.”

The piece, along with all other related artwork that was on display at the school, was only taken down on Friday, as the unit was nearing a close.

“We support what [officers] do every day and we’re so thankful for everything they do to keep our students safe,” Green said, “but we also hope that they understand the dialogue that we’re trying to have in the classroom to prepare these kids for the world outside of school.”

Now that’s the kind of dedication to student expression and learning we can get behind.