This week is Sunshine week, a nation-wide celebration of open access in government. Sunshine week was started in 2002 by the Florida Society of Newspaper Editors in response to proposed legislation that would have severely undermined the state’s open records law.

We at NCAC are frequent users of state records requests, particularly to bolster our work on individual censorship cases. Accessing e-mails, memos, letters and official complaint documents from local officials and community members helps us better understand the nuances of a censorship incident and provide the best support and advocacy for the endangered work of art, book or idea.

The Freedom of Information Act (5 USC § 552) was enacted nearly fifty years ago, on July 4, 1966. FOIA was the brainchild of California Congressman John Moss in the mid-fifties, after the Cold War led to increased government secrecy. Interestingly, President Lyndon B. Johnson strongly opposed the bill up until the moment he signed it into law. In his signing statement, however, he remarked “I sign this measure with a deep sense of pride that the United States is an open society.” (Learn more about the history of the FOIA here and here.)

In contribution to Sunshine week, we are going to share some of our findings from Kids’ Right to Read Project records requests. The many documents we have accessed over the years provide a fascinating glimpse into the arguments for and against censorship.

In the fall of 2011, a parent in Frederick county Maryland began a challenge to a 3rd grade social studies textbook called Social Studies Alive. The challenge and the debate it sparked lasted throughout the school year. Several tiers of committees and groups of school officials considered the challenge, and the parent appealed their decisions as far as she could. Ultimately, the book was kept in classrooms until its regularly scheduled review in 2014. 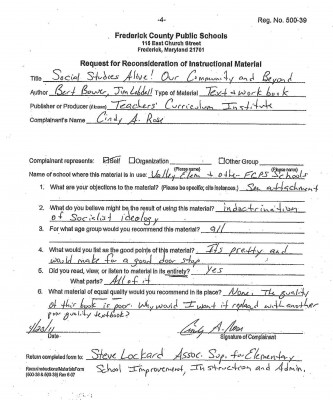 While we advocated for the district to retain the book, we also found common ground with the complainants: one of the hearings about the book was done behind closed doors, barring citizens from public comment about the issue. Those who lobbied to remove the book wrote:

“We appealed the superintendent’s recommendation and currently have a ‘closed hearing’ scheduled for August 6, 2012.  We object to the closed hearing and believe it should be open to the public.  We further believe it is a violation of the Maryland Open Meetings Act.  There is nothing in this hearing that concerns personnel, pupils nor pupil grades.  FCPS cannot close a meeting because it doesn’t want the publicity or negative outcries from the community.”

In this case, both sides agreed on one point at least: the importance of Sunshine laws.

You can read the full packet of complaints here.