In celebration of Sunshine Week, we’re dipping into our files of our many open records requests from censorship incidents around the country.

TinTin, the iconic character created by Belgian writer Georges Remi, was first introduced to popular culture over 80 years ago, in 1929.  Needless to say, the adventure-seeking young reporter’s 2014 world looks mighty different than the world into which he was originally drawn. In recent years, interest in the comic book character has revived.

But modern readers who have returned to the classic TinTin books for children aren’t entirely pleased with what they find between the covers. TinTin’s 1930s world is full of stereotypes, prejudices and overt racism that are now taboo in our 21st century world. 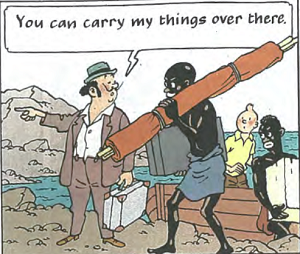 Several parents in Amherst, MA raised a complaint in late 2013 about shelving TinTin books in the children’s section of the public library. A records request to the library director yielded documents submitted by the parents, who complained about “overtly racist images and storylines…inappropriate for young children.”

Andrew Grant-Thomas, one of the parents, said he was “astonished” by the books. Tintin in the Congo in particular, drew his concern for its depiction of the Congolese as stupid and lazy. “Our argument is fairly straightforward: These books are profoundly racist books.”

In the complaint packet (which you can read here) they featured images of particularly racist panels and also begged the question about other historically interesting children’s books that would be hateful to us today.

Ultimately, the public library strongly defended the location of the books and their existence in the library. “If the Jones Library does nothing else, we protect everyone’s constitutional right to read anything he or she wants,” Library Director Sharon Sharry said. “Our mission does not include censorship.”

Click here to learn more about what you can do to contribute to Sunshine Week and protect open access to government.