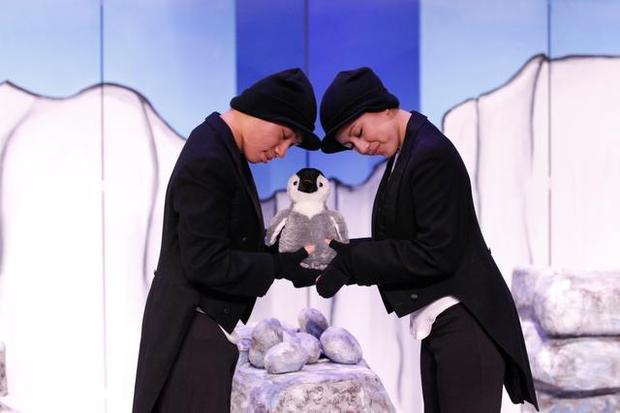 It's almost too ironic to be true: Just days after a performance at an anti-censorship conference, a play was censored at a nearby school.

That's what happened with Emily Freeman's "And Then Came Tango," which tells the very true story of two male penguins living at the Central Park Zoo that cared for an orphaned egg.

If that rings a bell, it might be because the same story is told in the children's book And Tango Makes Three by Justin Richardson and Peter Parnell, which is regularly challenged by parents who worry that it is an inappropriate endorsement of homosexuality. Yes, gay penguins are just as 'threatening' as gay people.

On April 10, Fresno State’s Theatre for Young Audiences group brought the play to the "Outlawed: The Naked Truth About Censored Literature for Young People" conference. That wasn't the only performance scheduled for that week in Fresno; Tango was to be part of a full school assembly less than a week later at the Sierra Foothill Charter School in Catheys Valley, about an hour's drive from Fresno.

But some parents at the school voiced strong disagreement with the show, even though it had been performed at area school without any complaints. The school announced that it was being postponed, and that an April 28 meeting of the school board would include time to discuss the controversy. At the meeting, the school's board voted unanimously to cancel the show.

One parent said cancelling the show was "the best thing for our community," but not everyone agreed–including some students, who were reportedly wearing rainbow bracelets to support the show. School administrators put a stop to that, too.

Writer/blogger Rob Watson may have said it best in an open letter to the community:

By your actions, you have shut down a great educational opportunity.

That opportunity was not for your kids, it was for you.