Previous Next
Censoring Islam in Georgia? 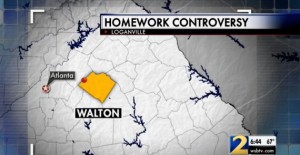 Some disturbing news out of Georgia this week after parents in bucolic Walton County got fired up about their children learning about Islam in public schools. In response to the controversy, the Georgia Department of Education removed a program guide called “Respecting Beliefs" that was part of its statewide middle school requirements.

According to news reports, Georgia middle school students must be able to describe the cultures of the Middle East and compare and contrast the prominent religions – Judaism, Islam, and Christianity. “It is important that students understand the tensions that exist in the region,” according to the Georgia Performance Standards.

But some parents are opposed, claiming that their children are being “indoctrinated” and that students should also be taught about radical Islam.

While these parents have every right to argue about curriculum, they seem to be missing the big picture. There’s a difference between teaching about religions and teaching religion, period. It’s never a bad idea for educators to review material and make sure ideas, concepts, and histories are taught the best they can be. But this rising tide of Islamophobia should leave us more than a little worried. When the very notion of learning about a different culture is censored, the results can be disastrous.

This isn’t the first time NCAC had dealt with a case like this, and we’re sure it won’t be the last. Stay tuned.