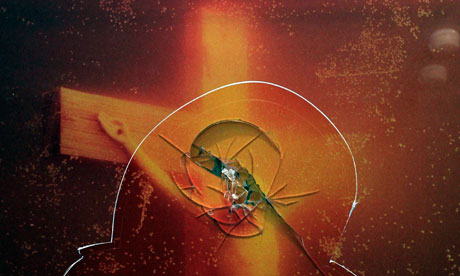 Last October we reported about an incident at the Loveland Museum/Gallery in Colorado where a woman ripped into a lithograph after she busted the artwork’s plexiglass case with a crowbar. She did this because God told her to do it. In her explanation of the vandalism, Kathleen Folden refers to the similar destruction of Andres Serrano’s Piss Christ in Australia in 1997 – “only oceans” apparently kept her from destroying the piece herself. And now the epidemic of violence among devout Christian extremists has spread to the cradle of the Enlightenment: France. This past Sunday (Palm Sunday) a group of French Catholic fundamentalists in Avignon attacked an exhibition print of Piss Christ with hammers. Another Serrano photograph, of a meditating nun, was also slashed. The damaged piece will remain in the exhibition as a testament to the barbarity.

The action was not just the work of a few crazy people. As the Guardian reports,

Civitas, a lobby group that says it aims to re-Christianize France, launched an online petition and mobilized other fundamentalist groups:

The (…) archbishop of Vaucluse (…) called Piss Christ “odious” and said he wanted this “trash” taken off the gallery walls.  Last week the gallery complained of “extremist harassment” by fundamentalist Christian groups who wanted the work banned in France.

Then, on Saturday, a day before the vandalism “around 1,000 Christian protesters marched through Avignonto the gallery. The protest group included a regional councilor for the extreme-right Front National, which recently scored well in the Vaucluse area in local elections.

The gallery director, Eric Mézil, said the “movement against Piss Christ had started at the time of President Nicolas Sarkozy’s ruling UMP party’s controversial debate on religion and secularism in France. At a record low in the polls before next year’s presidential election, Sarkozy has been accused of using anti-Muslim and extreme-right rhetoric to appeal to voters and counter the rise of the Front National.”

The collusion between dominant Christian denominations, nationalism and government in attacks on art is already a familiar reality in Russia. In January 2003, a gang of Russian Orthodox activists destroyed “Caution! Religion,” an exhibition in the Sakharov Museum. Instead of the vandals being punished, two Sakharov Museum officials and three of the exhibition organizers were convicted of religious hatred. The vandals, meanwhile, were hailed by church officials as heroes and martyrs, and all criminal charges against them were dismissed.

A year later, in January 2004, vandals wearing camouflage gear invaded the S.P.A.S. Gallery in St. Petersburg and splattered paint and ink over an exhibition of Oleg Yanushevsky’s constructions, called “Contemporary Icons.” Yanushevsky’s ironic message—that President George W. Bush, Governor Arnold Schwarzenegger, and other political and pop-culture celebrities were the modern equivalents of holy figures—was considered an insult to the Russian Orthodox Church and to the sensibilities of believers. Although the works were destroyed and the gallery seriously damaged, the St. Petersburg prosecutor refused even to investigate the vandalism.

Religion-inspired violence is clearly not reserved for Muslims attacking cartoon artists or murdering filmmakers. While the expression of any ideas – no matter now extreme – should be protected, nothing, not even the most cherished beliefs, excuse the physical violation of a person or an artwork. Yet with their inaction or with their collusion with the views of extremists government officials encourage such violence. Make no mistake: these are crimes of hate not acts demonstrating the love of God.