Cooper Union takes down a banner of Stalin, a reproduction of a drawing by Picasso that was part of an exhibit designed by Norwegian artist Lene Berg. 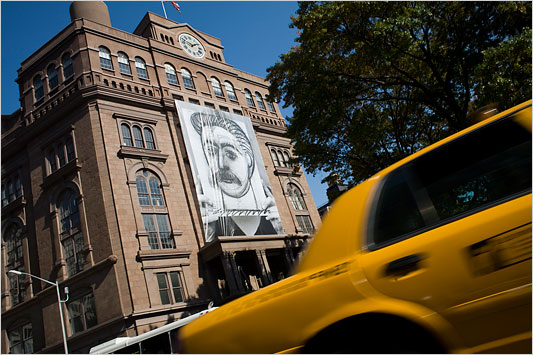 In a statement issued to Cooper Union staff members and students, the university said it removed the banner after the Buildings Department, which had received complaints about it, pointed out the school did not have a permit for it. The school also said the removal of the banner occurred as a “gesture of respect for our neighbors,” since this year marked the 75th anniversary of a famine imposed by Stalin that killed millions of Ukrainians.

[Lene] Berg, who is based in Berlin, said the brouhaha over the banner was ironic, because the original Picasso image was not, in fact, seen as sympathetic to Stalin. Commissioned by Louis Aragon, a Stalinist sympathizer […] the image was viewed as unflattering of the Soviet leader, and prompted widespread condemnation of the artist by French Communists, she said.

Description of the project:

At Cooper Union, Lene Berg will also present the video project ‘Stalin by Picasso, which has as its point of departure the so-called ‘Portrait Scandale’, an old dispute about Picasso’s portrait of Stalin with a moustache and feminine features, and ‘Gentlemen and Arseholes’ that deals with western cultural politics and propaganda during the cold war, in particular with the role of artists and intellectuals working for the organization for the Congress for Cultural Freedom. Lene Berg will additionally exhibit related collages, publications and an outside banner.