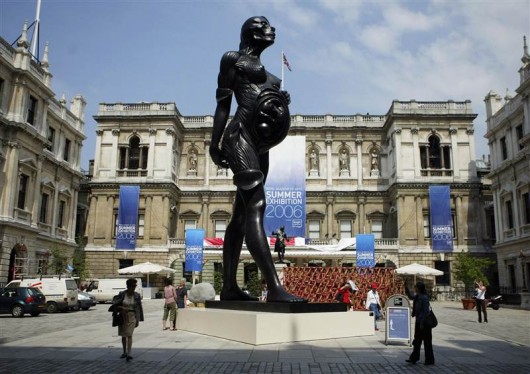 Damien Hirst’s The Virgin Mother is a large piece about even larger subjects: life, death, birth, and humanity. But is it too large for Old Westbury, L.I.?

The Virgin Mother was previously displayed (there are several casts) at Lever House in Manhattan, outside London’s Royal Academy, and on Fontvieille
Harbour, Monaco. But now that it landed in posh Old Westbury, on the art-filled estate of developer Aby Rosen, neighbors are up in arms and poised to adopt
new height regulations for structures on private lawns.

At 33ft, the bronze sculpture is not really that high – there is many a tree that towers over it. And the issue here is clearly not the size, but what the
sculpture represents. And therein lies the problem.

It is understandable that communities want some regulations on structures which, though built on private land, are within public view: an old car tossed in
a driveway or a rotting porch can certainly affect the value of property around it, several abandoned and graffiti-covered houses on a street can signal
the downfall of a neighborhood, and an extra tall industrial building can destroy the soul of a historic district.

So, yes, regulations are understandable, but in this case we have a well-regarded, if controversial, work by one of today’s most celebrated artists. It
certainly won’t bring down Old Westbury or transform it in any significant way. So, the only reason to remove The Virgin Mother would be that some
community members just do not like it.

If the armies of the quickly offended have their way in Old Westbury, this will be a loss for all those who care to have an open, vital and, yes, even
agonistic public culture. For if they succeed in removing a sculpture from someone’s backyard, what then when genuinely public art is concerned? Should
that be only the blandest, least provocative, sleekly decorative?

We urge the residents of Old Westbury to live with The Virgin Mother a little, perhaps, as has happened with many a work of art or architecture, they may
learn to like it.

Witness the initial controversy over the now beloved symbol of Paris. In 1887, when work on the Eiffel Tower had hardly begun, a following statement was
signed by several big names from the world of literature and the arts: Charles Gounod, Guy de Maupassant, Alexandre Dumas junior, François
Coppée, Leconte de Lisle, Sully Prudhomme, William Bouguereau and others:

“We come, we writers, painters, sculptors, architects, lovers of the beauty of Paris which was until now intact, to protest with all our strength and all
our indignation, in the name of the underestimated taste of the French, in the name of French art and history under threat, against the erection in the
very heart of our capital, of the useless and monstrous Eiffel Tower which popular ill-feeling, so often an arbiter of good sense and justice, has already
christened the Tower of Babel. (…) Is the City of Paris any longer to associate itself with the baroque and mercantile fancies of a builder of machines,
thereby making itself irreparably ugly and bringing dishonor

To comprehend what we are arguing one only needs to imagine for a moment a tower of ridiculous vertiginous height dominating Paris, just like a gigantic
black factory chimney, its barbarous mass overwhelming and humiliating all our monuments and belittling our works of architecture, which will just
disappear before this stupefying folly.

Now, if they could just refer to some height regulations…

Why is it important to you that we allow interesting art into public space? What’s the weirdest, least expected public art you’ve ever encountered? Let us know in the comments!