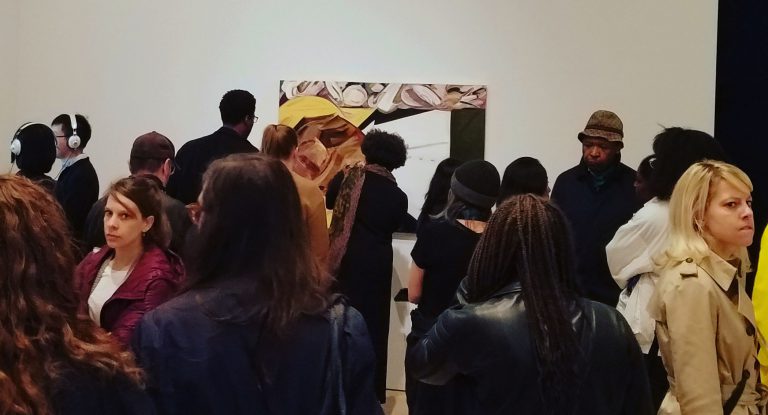 Crowds and Dana Schutz’s “Open Casket” at the 2017 Whitney Biennial.

Should an artist be blacklisted and blocked from showing their work at museums around the nation because one of their recent paintings tackled the painful topic of the history of racial violence?

A small group of Boston activists demand as much in their passionate opposition to the current Dana Schutz exhibition at ICA Boston. They are asking the Institute to cancel the show in order to penalize Schutz, the artist behind Open Casket, a work drawing on the well-known photograph of Emmett Till lying disfigured in his casket.

When Open Casket was part of the 2017 Whitney Biennial, it became the subject of heated debate, primarily over who should have the right to represent a history that has caused an oppressed minority pain. Some argued that Schutz, as a white artist, belonging by virtue of her skin color to a historically dominant group, should never be allowed to base her work on a historical moment of trauma for black Americans.

The current political context – which has brought increased visibility to the race bias in institutions like the police force, as well as to the virulent racism that continues to plague this nation as a whole – was both what Dana Schutz was reacting to with the piece and also what sensitized the protesters objecting to it. It focused and amplified a simmering conflict that had been haunting a mostly white dominated art world for a while. As ICA’s Director Jill Medvedow, said in a statement “Art often exposes the fault lines in our culture, and Open Casket raised difficult questions about cultural appropriation, race, and representation.”

The Whitney hosted an open public debate in response to the controversy and created a platform where different positions where expressed and heard. The ICA plans to do the same (though Open Casket is not in the exhibition). However, the protesters do not want debate and conversation, they want their position to dominate and the exhibit to be taken down. No matter how important their goal of overcoming the American legacy of racial inequity (a goal shared by the majority of those who would visit the show, as well as by the artist herself), their tactics are bad:

Blacklisting an artist who has engaged in the conversation about racial violence with the best of intentions (though with controversial results), is not going to move us one inch towards social justice, it will only create fissures among allies at a time when alliances are exactly what we need if we are to hope for a more progressive America.