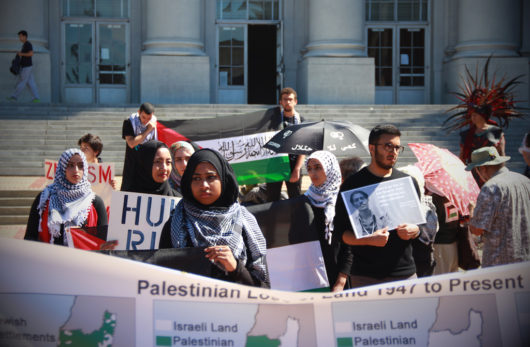 4 Fordham students, who are members of the pro-Palestine group, will be represented by the Center for Consititutional Rights, Palestine Legal and the consitutional lawyer Adam Levine in the suit.

The students argue that Fordham University is guilty of infringing their First Amendment rights by commiting an act of viewpoint discrimination in denying the campus group official status.

UPDATE 2/22/2017: A student who organized a rally to protest Fordham's decision not to ratify the Students for Justice in Palestine group is facing a closed door disciplinary hearing with the Dean as a consquence.

FIRE reports that the Dean alone will be responsible for the outcome of the hearing. “Dean Eldredge is treating his students like the Queen of Hearts treated Alice,” said Ari Cohn, director of FIRE’s Individual Rights Defense Program. “But we haven’t fallen through a rabbit hole and this isn’t a Lewis Carroll novel. Dean Eldredge can’t unilaterally ignore due process rights to silence students with whom he disagrees.”

UPDATE 1/27/2017: In response to NCAC and FIRE's letter, Fordham University have issued a deeply unsatisfactory explanation for refusing official club status to a campus chapter of Students for Justice in Palestine (SJP). Fordham argues that "other chapters of [Students for Justice in Palestine]" have acted on other college campuses in ways that breaks Fordham's code of conduct.

In response, NCAC & FIRE have penned a second letter arguing that Fordham's "guilt by association" argument "is an illegitimate ground upon which to restrict students' expressive rights." The letter underlines that the Fordham's SJP is independently run and bears no responsibility for the actions of the national organization. The allegation that a Fordham SJP would engage in similarly "disruptive" conduct is completely unfounded.

UPDATE 1/25/2017: NCAC and the Foundation for Individual Rights in Education (FIRE) have written to Fordham University to demand Fordham University uphold its commitment to the freedom of expression of its students and reverse its decision not to ratify its campus chapter of Students for Justice in Palestine (SJP). The letter argues that the university's original decision is non-justifiable arguing that freedom of speech protects all speech, including controversial or "polarizing" speech, which Fordham argued SJP were guilty of.

University has denied the formation of an official campus chapter of the pro-Palestinian student advocacy group, Students for Justice in Palestine (SJP). The University has justified the decision based on the group’s “political goals” and support for the Boycott, Divestment, and Sanctions (BDS) movement against Israel, which they say are contrary to Fordham’s “mission and values.”

Members of the unofficial SJP group at Fordham had been in the application process of attaining university ratification for over a year. Finally, in December, they received an email from the University Dean Keith Eldredge who announced their application was denied.

In the email Eldredge states “[he] cannot support an organization whose sole purpose is advocating political goals of a specific group, and against a specific country, when these goals conflict with and run contrary to the mission and values of the University.” It specifically cites the group’s support for BDS, an effort to pressure Israel into ending its occupation of Palestinian lands through cultural and economic boycotts, as leading to on-campus “polarization” rather than dialogue.

SJP’s promotion of the “political goals of a specific group” cannot justify banning the group. Indeed, numerous clubs at Fordham, such as the College Democrats and College Republicans, are devoted to the pursuit of specific political agendas. Nor does SJP’s advocacy against a single country’s policies—namely Israel—provide grounds for denial of registration. Indeed, many clubs on campuses across the nation (such as Students for a Free Tibet) are focused on condemning the policies of foreign governments.

Dean Eldredge’s concerns that the formation of a SJP club will lead to “polarization rather than dialogue” presents a false dichotomy:  groups holding radically opposed views can still foster dialogue…unless, of course, one of those groups is banned from existing. SJP’s advocacy for BDS and other controversial initiatives is likely to promote awareness of the complexity of perspectives in the Israel-Palestine conflict. Supporters of Israel are, of course, just as free to engage in their own activism. In short, where SJP’s existence on campus may well lead to more dialogue, its ban would stifle potential dialogue for certain..

As an institution that recognizes that “each member of the University has a right to freely express his or her positions and to work for their acceptance whether he/she assents to or dissents from existing situations in the University or society,” Fordham should embrace student activism on controversial issues rather than seeking to suppress it.

NCAC is currently in the process of drafting a joint letter with the Foundation for Individual Rights in Education (FIRE) to protest the university's decision.