'Sorry, We Can't Ban Everything That Offends You"

The Guardian presents this video by Julie Bindel

The ACLU has filed a Freedom of Information Act lawsuit

seeking information about federal government programs that purport to prevent “violent extremism” but that actually cast suspicion on law-abiding Americans and unfairly target American Muslims. The lawsuit was filed in February 2016 in the U.S. District Court for the District of Columbia.


FIRE is closely tracking what's happening at the Maryland college

The Nation has a great discussion of Catherine Ross' new book, "﻿Lessons in Censorship: How Schools and the Courts Subvert Students’ First Amendment Rights

Ross, a professor at the George Washington University Law School, makes a compelling case in Lessons in Censorship for the importance of according students free speech not only as a constitutional right, but also as a vital democratic practice.


Self-Censorship and  'A Cake for George'

Chris Finan of American Booksellers for Free Expression (ABFE) weighs in on the controversy over a children's book that was withdrawn by Scholastic:

Should booksellers and other members of the publishing community be concerned when an author has second thoughts about something she has written or a publisher decides to stop distributing one of its books? What are the implications for the freedom to write, publish, and sell books?

Some community members are outraged by the existence of a gay-straight student club at their Tennessee high school. But as Rob Boston of Americans United for Separation of Church & State notes, the federal law that allows for such student clubs was actually something that conservative Christians fought for in the 1980s:

In Congress, legislators passed something called the Equal Access Act. They had been prodded to do it by a coalition of conservative Christian and Religious Right groups. These organizations wanted students at public secondary schools to have the right to form Bible clubs that would meet during non-instructional time (usually defined as just after school).

Free Speech? There's a Zone for That

Over a thousand political demonstrators were confined to a "free speech zone" more than a mile away from the media assembled for the Republican presidential debate at St. Anselm College in Manchester, NH.

The Philadelphia Inquirer reports that the city's Museum of Art got into trouble for posting this 'suggestive content': 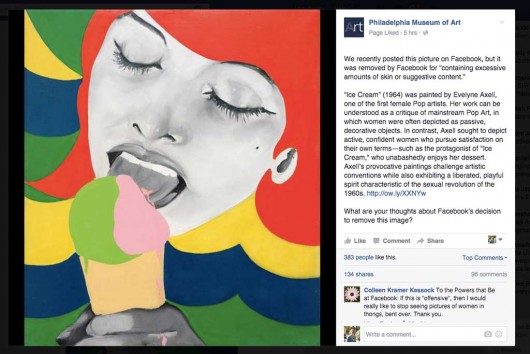