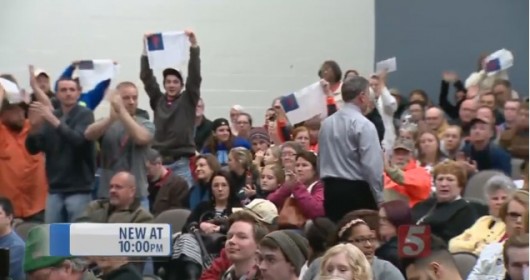 At Franklin County High School in Winchester, Tennessee, some students and parents are outraged by the very existence of the Gay-Straight Alliance. And the school board is trying to figure out what, if anything, to do about it.

The club was formed in December after it secured a sponsoring teacher, and held a meeting in January. It seeks to "offer a space where LGBT students and their allies can speak freely and honestly with their peers about issues specific to LGBT students without fear of rejection or harassment." Of course, anyone who doesn't wish to be a part of this doesn't have to attend.

But some of the community anger over the club's existence was expressed loud and clear at last week's board meeting, with one parent declaring that "there’s really no place for discussion of sexual orientation in a public high school." That statement is mild compared to what some other opponents have been saying; a local news report noted that one Facebook critic of the club compared it to the Islamic State terrorist group, and some of the group's flyers at school have been defaced. The club's supporters spoke out, too.

It appears unlikely that the school board will take action against the club–which is a good thing, since that would likely be against the law. As Rob Boston of Americans United for the Separation of Church & State pointed out, the Equal Access Act was passed (ironically enough) to allow students to form Bible study groups.

So if the club was formed according to school and district policies, what is left for the school board to do?  There was some discussion about evaluating those policies, though any changes would not be retroactive. Another option that has been raised is banning all student clubs.

Let's hope the board recognizes the rights of the students to organize and speak as they see fit. It would be a wonderful lesson in free speech for students and parents alike.