Previous Next
Gang Activity? Or Just Trying to Keep Warm? 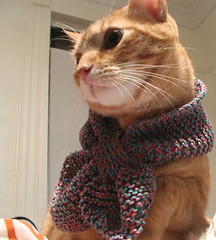 After a student-led protest in Montgomery, NY, Valley Central High School lifted a blanket ban on neck scarves, which had been interpreted as “gang paraphernalia” by the school administration.   The protest, which included a refusal from many students to obey the new “no-scarf” policy, as well as a petition garnering 300+ signatures, resulted in the school board investigating how the ban came about, and ultimately the school’s decision to reverse its decision.

This case brings up an issue that many students are familiar with- the crack down on  “gang paraphernalia.”  But while the threat of gang violence is  genuine for some school districts,  many schools have over-reacted to fairly innocuous expressions that turn out to have more to do with popular fashion, or in this case “warmth”.