Previous Next
Hebdo, Hypocrisy and Mendacity

#JeSuisCharlie and the Limits of Free Speech

The massacre at the Paris offices of newspaper Charlie Hebdo have inspired a robust discussion of free speech, and the difference between government censorship and private self-censorship.

The massive January 10 march in Paris was, among other things, intended as a demonstration of support for free speech and press rights. But some of the most prominent world leaders in attendance are better known for suppressing the rights of journalists and trampling on free expression. The presence of representatives of governments like Jordan, Turkey and Saudi Arabia—a day before the march that government administered the first round of public floggings to a blogger—led the group Reporters Without Borders to denounce these “predators of press freedom.”

But one needn’t look just to other countries to note some obvious hypocrisies. While discussions about the satirical work published in Charlie Hebdo might lead one to assume France welcomes free-wheeling discussion, its so-called “hate speech” laws demonstrate otherwise. The most notable example might be the comedian Dieudonné, whose work has long been criticized as racist and anti-Semitic. The French government has blocked several of his performances over the years, and after he posted a Facebook message that said, “Tonight, as far as I’m concerned, I feel like Charlie Coulibaly”—a play on #JeSuisCharlie that references the name of the man who carried out the attack on a kosher market—he was detained.

The Associated Press reports that there are 54 arrests on similar charges, “raising questions about whether President Francois Hollande’s Socialist government is impinging on the very freedom of speech that it so vigorously defends when it comes to Charlie Hebdo.”

For some, the double standards hit closer to home. Some US political cartoonists were discussing their difficulties with prominent American newspapers, often over political or religious content that could offend some readers. Artist Michael Kupperman wrote about his (short-lived) tenure at the New York Times, where editors would not publish one cartoon that dealt—quite respectfully, for the record—with Jesus Christ (“The editor is asking why are we making fun of religion”) and another that mocked online bullying (“This news story is just too sensitive to be prodded at in a humorous way.”) 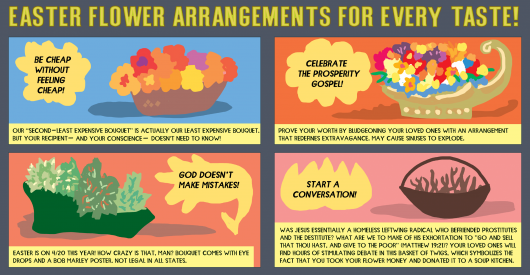 Cartoonist Ted Rall took to Twitter to recall some of his interactions with newspaper editors, most notably the question he received at one job interview: “Will I ever look outside my window and see people protesting a cartoon that you drew?” When he admitted that was “certainly possible,” the editor told him: “Wrong answer.” He went on:

I was considered for a job in St. Louis, but the editorial page editor said that her readers didn’t want to be challenged or offended.

Every political cartoonist has stories like this. Cowardice is the dominant personality trait in the press in the United States.

And back in 2007, journalist David Wallis wrote about some of the same problems:

In America, cartoonists don’t face banishment, jail cells or assassinations. Suffering for art here means killed cartoons, not killed cartoonists….Here, it’s the newspapers and magazines that do most of the censoring. Work deemed controversial, sacrilegious, risqué, politically incorrect or simply bad for business often gets killed before publication.

Indeed, that kind of self-censorship could often be seen in the coverage of the Hebdo massacre, where many major papers and television outlets decided that a story defined by images from the newspaper should be told without showing any of the images in question. The New York Times, for instance, told readers that it had “chosen not to reprint examples of the magazine’s most controversial work because of its intentionally offensive content.”

Here’s how executive editor Dean Baquet attempted to explain the policy: “We have a standard that is long held and that serves us well: that there is a line between gratuitous insult and satire. Most of these are gratuitous insult.”

These policies serve to encourage the conclusion that works are ‘intentionally offensive’ for the sake of offending, that they are making no other point than to provoke an angry reaction—which just so happens to reinforce the attackers’ view of the images.

And it is difficult to know where the Times—or any other media outlet—is drawing these lines, though. The first cover of Charlie Hebdo after the massacre was still one the Times deemed unfit to print.

Other outlets, like the Washington Post, thought otherwise, and included the image. The Post’s executive editor Marty Baron explained their decision this way:  “Our policy has been to avoid publication of material that is pointedly, deliberately or needlessly offensive to members of religious groups. That remains our policy, but this doesn’t fall into that category.”

Nonetheless, some outlets are still reluctant to show viewers or readers the cover of a magazine that is selling out all over France (and the world). It is a particularly dramatic and effective case of self-censorship.

Free speech debates are often over where to draw the lines. But trying to define hate speech, or to determine what ‘intentionally offensive’ art might be, leads to paradoxes and contradictions, and the suppression of critical political speech.