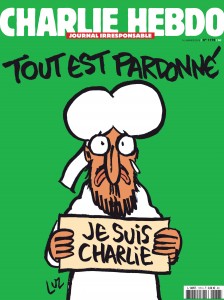 A handout document released on January 12, 2015 in Paris by French newspaper Charlie Hebdo shows the frontpage of the upcoming “survivors” edition of the French satirical weekly with a cartoon of the Prophet Mohammed holding up a “Je suis Charlie” (‘I am Charlie’) sign under the words: “Tout est pardonne” (‘All is forgiven’). The frontpage was released to media ahead of the newspaper’s publication on January 14, 2015, its first issue since an attack on the weekly’s Paris offices last week left 12 people dead, including several cartoonists. It also shows Mohammed with a tear in his eye. AFP PHOTO / HO /CHARLIE HEBDO = RESTRICTED TO EDITORIAL USE — MANDATORY CREDIT “AFP PHOTO / HO/CHARLIE HEBDO- NO MARKETING – NO ADVERTISING CAMPAIGNS — DISTRIBUTED AS A SERVICE TO CLIENTSHO/AFP/Getty Images