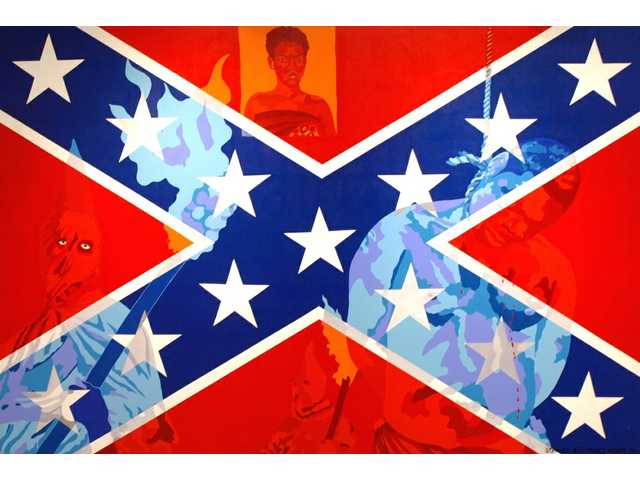 Stanley Bermudez’ Heritage? (above) had been displayed for just over two weeks at the Gainesville State College Gallery before Martha Nesbitt, the President of GSC, ordered its removal. The painting, which layers images of a Klansman and a lynching upon a Confederate battle flag, drew protests spurred by a post on Southern Heritage Alerts. The Heritage Preservation Association, which has since emerged as the initiator of the protests, is an organization dedicated to  preserving the “symbols, culture and heritage of the American South.” The Association saw the painting as part of a  “long line of systematic attacks on the values and history of the Old South” – as one of its members stated in a discussion about the censorship incident on February 16th.

But should a university president take it upon herself to decide this debate and stifle criticism of the racist connotations of the Confederate flag?  The President of a state college should know that the First Amendment is meant to protect precisely expression that some dislike and find offensive and that free speech protections apply with greatest force where an institution of higher learning is concerned – a place where a wide variety of ideas are heard and debated. Nesbitt did not appear at the public panel discussing the censorship and sent no other member of the administration to represent her: my guess is, she could not defend her hasty decision to suppress the artwork.

Artists have used the confederate flag in art before and have faced controversy: An art installation by John Sims called The Proper Way to Hang a Confederate Flag and consisting of a Confederate flag hanging from a noose at a 13 foot gallows, was set to be installed outdoors in front of Schmucker Gallery at Gettysburg College, PA in 2004. Sons of Confederate Veterans and other members of the community objected, claiming the exhibit was anti-southern heritage and could provoke violence.  Claiming safety concerns, Gettysburg College administration installed the work inside the Gallery.

Note the difference: Gettysburg College officials – unlike President Nesbitt – were all too aware that removing the piece because its ideas were disagreeable to some people was unacceptable in a democratic country. The inability of President Nesbitt to stand up for freedom of ideas when facing external pressures raises serious concerns her ability to lead an institution of higher learning.