Previous Next
NCAC, Allies Raise Concerns About Oregon Shakespeare Festival Boycott of Bookstore to Protest a Display About Censorship 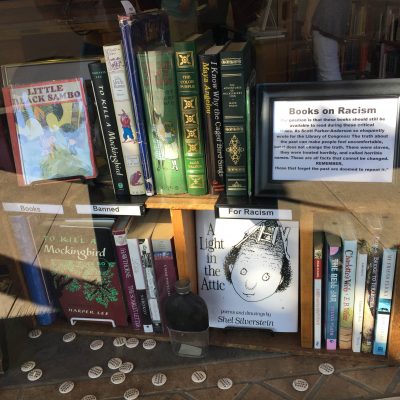 NCAC previously interviewed Judi Honoré, a bookstore owner whose educational display of banned books prompted the Oregon Shakespeare Festival to launch a boycott of the store. According to OSF Director Cynthia Rider, actors found the cover of Little Black Sambo, displayed in the store's front window as part of the banned books showcase, to be “hurtful and offensive.” Sadly, Ms. Honoré has recently announced that Shakespeare Books & Antiques will be going out of business as a result of the financial hardship and emotional stress caused by the boycott.

In a statement sent to Ms. Honoré and Ms. Rider of the OSF, NCAC and coalition partners question the boycott in a case like this, where the goal is to silence an opposing view.  The boycott flies in the face of the fundamental free speech principle "that the response to noxious ideas is more speech, not enforced silence." Instead of a boycott, NCAC would have encouraged “a public discussion about the reasons for the display, the reactions it elicited, and the role freedom of speech has played in the fight for racial justice and social change.”

The statement goes on to describe the closing of the store as “a serious and preventable loss to the intellectual and cultural life of the community OSF serves.”

Read the full statement below; click here for a full screen view.