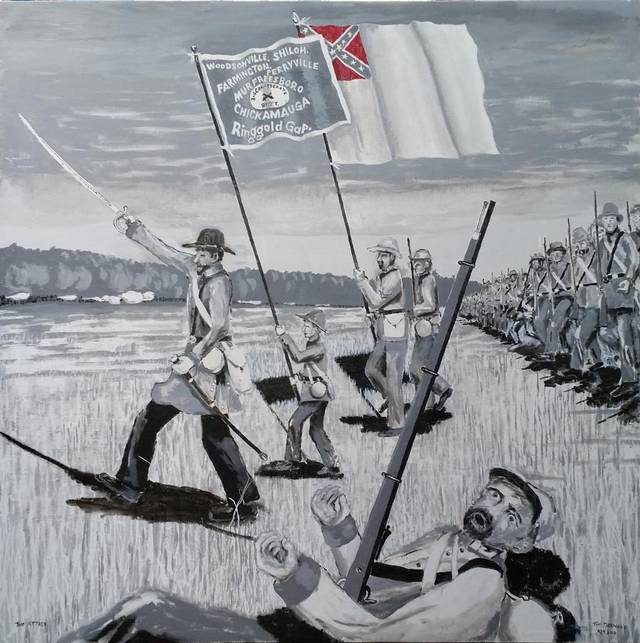 “The Attack,” by Timothy Desmond

UPDATE Oct 3, 2016: Desmond's lawyers sought an injunction to force fair officials to show the painting, but a hearing in federal court was canceled after the defendants agreed to let Desmond show his painting at the fair (The Fresno Bee).

A California artist is suing the state in federal court after his painting was disqualified from a local art competition because it contained a confederate flag.

Timothy J. Desmond, a Civil War buff and retired schoolteacher from Fresno, CA, submitted his painting “The Attack” to the 2016 Fresno County Fair’s fine art competition. Fair officials, however, rejected the painting's entry on the grounds that its exhibition would violate a 2014 California law banning the state government from selling or displaying Confederate flags on state property (the County Fair is state operated). “The Attack” depicts the 1864 siege of Atlanta and depicts a soldier carrying the Second National Flag of the Confederacy.

While the statute prohibits the state from selling or displaying the Confederate flag or any similar image, it does allow for its use in "a book, digital medium, or state museum that serves an educational or historical purpose." The law is also only meant to apply to the state and not to individuals, thus the state fair's exclusion of Mr. Desmond’s painting is a violation of his Constitutional right to free expression.

The bill’s sponsor, Assemblyman Isadore Hall III (D-Compton), in explaining the reasoning behind the legislation, has stated that the Confederate Flag is a symbol of hate and bigotry that should not be promoted or perpetuated by any element of American government. However, since the Confederate flag was rarely if ever flown on California state property, the measure seemed unnecessary at the time. The bill nonetheless passed the Assembly on a bipartisan 66-1 vote.

Given Mr Desmond's case, it seems that state officials did not consider the unintended or misconstrued ways the measure might be put into practice.

To this end, Mr. Desmond claims that the banning of his painting constitutes “a viewpoint-based restriction on speech in violation of the First Amendment," and is asking the Federal Court to declare the law unconstitutionally overbroad. According to the Center for Individual Rights, which is representing Mr. Desmond in court, "Desmond’s case illustrates the pitfalls of trying to draft prohibitions against particular viewpoints that are offensive to many."

While the state can prohibit the placing of Confederate flags in its own house, extending the ban to the expressions of private citizens is unconstitutional and runs afoul of First Amendment protections.