It’s Perfectly Normal for Books to Go Through Changes Too

Sex-Ed was always and will always be the proverbial Catch-22 of every pre-teenager and teenager’s education. They want to know about their bodies: how it works, what’s in store for the future, and whether what they are going through is normal. But we need to face the facts: it’s an awkward subject that no one wants to discuss. Luckily, author Robie H. Harris and illustrator Michael Emberly crafted an easy and informative resource for teenagers and adults on adolescent sexual health and development. Twenty years after the groundbreaking It’s Perfectly Normal was published, the New York Times talked to Harris about the anniversary editions of her books and some of the new issues they address for parents and children today:

It’s Perfectly Normal… expands its discussion of sexual identity beyond homosexual and heterosexual to include, and define, the now-common acronym L.G.B.T. (Lesbian Gay Bisexual Transgender), and it slightly expands a chapter on sexual abuse to add a discussion of the word “harass.” In both cases, it’s not that things have changed, but that we’ve changed in the way we talk about it. “That’s the language that makes sense,” Ms. Harris said. “That’s what they hear. Kids need to have the information they need to understand what’s going on and treat everyone respectfully.”

Regardless of moral or religious creed, everyone needs answers to these questions. Nonetheless, this hasn’t stopped parents from decrying the book as an encyclopedia of “vile and gratuitous sexual premises.” But as Harris says, “it’s a wonderful time to talk about your own values…They can start the conversation.” Thankfully, Harris, Emberly, and the many parents and teenagers who cherish the tome have, essentially, made this conversation perfectly normal.

Robie H. Harris will be honored at NCAC’s 40th Anniversary Celebration of Free Speech and its Defenders along with Neil Gaiman for their outstanding literary works and firm commitment to standing up against censorship. 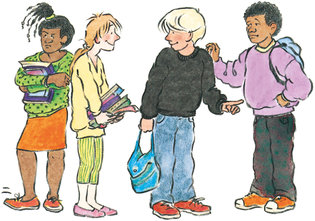