Previous Next
It’s Perfectly Normal Under Siege in Oregon 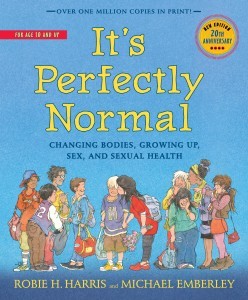 You can’t always believe everything you hear. The prevailing narrative in Rainier, OR, is that nine-year-old kids were forced to look at “explicit” books in their school library. But things aren’t always what they seem. That book? The critically acclaimed It’s Perfectly Normal, by Robie Harris. Those kids? Some reportedly asked to look at that book and others after the preceding sixth grade class accidentally left them out.

But the librarian, Alison Dale-Moore, has been caught in the crossfire after procuring the book and a number of others for the district’s new sex-ed curriculum at the bequest of sixth grade teachers and with approval from the administration. Members of the community have taken a keen eye to the collection, pointing out other books that might be “inappropriate” for their kids. Fox news is reporting that objectionable books have been removed from library shelves pending review, but that may not actually be the case.

The district has a fairly clear procedure in place to respond to such challenges, noting that an objection may arise “despite the fact that the individuals selecting such materials were duly qualified to make the selection and followed the proper procedure and observed the criteria for selecting such material.” The books, according to procedure, are supposed to remain in use while a complaint is being considered. We’ve been told that they are still available, and we hope that’s true. Apparently no formal complaints have even been filed.

It’s a wonderful time to talk about your own values. Someone may disagree with what I wrote. They can say, ‘This is what our family believes. This is what this author wrote. This is what your friends may believe.’ They can start the conversation.

We’re working with our partners at the American Library Association's Office of Intellectual Freedom to get to the bottom of this, sifting through competing narratives. We understand that in so many cases, school districts feel as if they’re between a rock and a hard place. But we hope that Rainier School District is standing firm in its commitment to the First Amendment and sound educational principles. We’ve got their back if they do.