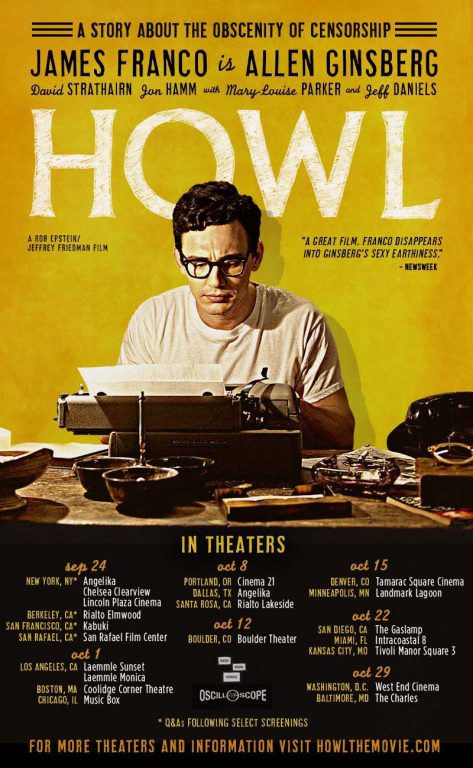 Beat-icon Allen Ginsberg is getting a resurgence of attention, 13 years after his death at the age of 70. A movie based on the story behind Ginsberg’s signature poem, HOWL, opens this Friday, September 24. It stars James Franco as the young poet embroiled in a 1957 obscenity trial over the poem, which ended in a landmark win for free speech.

Join NCAC at the screening of HOWL on Friday September 24 7:40PM at the Angelika Film Center in NYC. There will be a special Q & A after the film, lead by Peter Hale and Bob Rosenthal of the Bob Rosenthal and NCAC Director of Programs Svetlana Mintcheva. (Can’t make this one? Check out other screenings here.)

Reason.tv‘s Nick Gillespie looks at why Ginsberg—a champion of gay rights, free speech, nonviolence, and drug legalization—still has a lot to teach us.  You can watch the interview here:

The opinion vindicated Ginsberg (then vacationing in Paris), liberated Ferlinghetti (the publisher of Howl and Other Poems, who, during his obscenity trial, prominently displayed the book in his store window), and celebrated the First Amendment as a constitutional haven for cultural outsiders.

“The authors of the First Amendment knew that novel and unconventional ideas might disturb the complacent, but they chose to encourage a freedom which they believed essential if a vigorous enlightenment was ever to triumph over slothful ignorance. . . . The best method of censorship is by the people as self-guardians of public opinion and not by the government.”

Against that philosophical backdrop, he added:

It was pure John Stuart Mill, pure Louis Brandeis, pure protection for dissident expression. This municipal judge, whose daily routine was traffic offenses and other petty infractions, understood and developed obscenity law in ways that would take the Supreme Court — and Justice William Brennan Jr., too — decades to work out in a multitude of First Amendment cases. Pure poetic justice it was.

The film stars James Franco in a career-defining performance as Allen Ginsberg, John Hamm, Mary-Louise Parker, Jeff Daniels, and many more.  We hope to see you there!