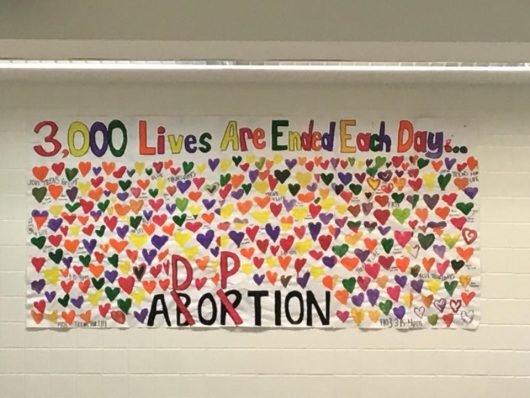 NCAC has written a letter to Carmel Clay Schools in Indiana in response to an incident in which school administrators removed a hand-painted poster created by a pro-life group, the Carmel Teens for Life. The poster contained hearts symbolizing aborted fetuses and was intended to promote adoption as an alternative to abortion. Attorneys for the Carmel Teens for Life group claim that the poster was removed after students said they found the poster offensive.

NCAC’s letter informs Carmel Clay Schools that the pro-life poster represents non-disruptive political speech that is protected under the First Amendment. Restricting political speech in response to subjective claims of “offense” would severely harm the educational process, as students would lose the opportunity to discuss divisive yet important issues such as race, religion, and immigration.

The letter also highlights how schools may only restrict speech using viewpoint-neutral time, place, and manner restrictions. Schools may not engage in content-based viewpoint discrimination simply because certain political views are unpopular or have the potential to offend.

The students’ attorneys have also claimed that administrators have demanded that Carmel Teens for Life “receive prior approval for all communications, and that they not use the word ‘abortion’ in any communications, including Facebook.” NCAC calls on Carmel Clay Schools reconsider this demand, as it works to prevent students from holding educationally valuable discussions on important political issues.